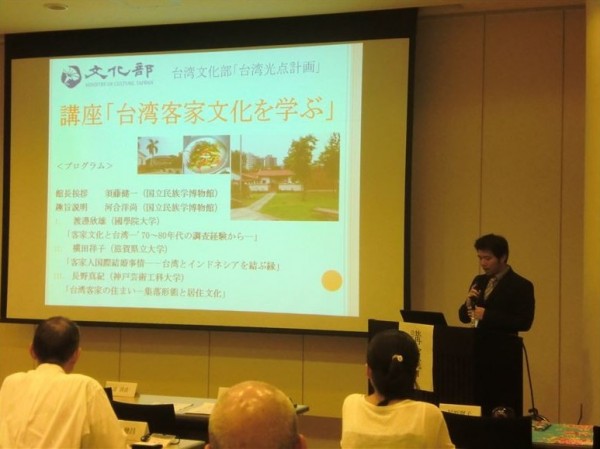 A series of events highlighting the role of Hakka culture in Taiwan has kicked off in Osaka as part of the Ministry of Culture's efforts to deepen cultural exchanges with Japan.

The events include symposiums, cultural festivals, and film screenings that are jointly organized by the Taiwan Cultural Center in Tokyo and the National Museum of Ethnology of Osaka under the auspices of the Spotlight Taiwan project.

The first event, a symposium titled "Getting to Know Hakka Culture,” introduced the history and current development of Hakka culture to Japanese audiences on July 11. The symposium received praise from Kenichi Sudo (須藤健一), director of the National Museum of Ethnology, for its attention to detail.

A second symposium on Hakka culture will take place at the museum on Sept. 6. Hsieh Chu-jung (謝珠榮), former member of the famed all-female theater troupe Takarazuka Revue, and Chen Ching-fang (陳荊芳), president of the Tsung Tsin Association of Japan (日本崇正總會), are scheduled to attend.

In addition, the Hakka-language epic "1895” based on a novel by Li Chiao (李喬), one of Taiwan's best-known Hakka writers, will be screened at the museum on Sept. 23.

The movie brings to life the Hakka militias' resistance against Japanese troops after Qing Dynasty China was defeated in the First Sino-Japanese War (1894 - 1895) and ceded Taiwan to Tokyo under the Treaty of Shimonoseki.

The series will end with an Hakka Culture Festival on Nov. 28, where Lo Si-rong (羅思容), a Golden Melody Award-winning Hakka singer-songwriter, and her band Gomoteu (孤毛頭) will take to the stage at the museum.

On the sidelines of the festival, workshops on making Hakka oil-paper umbrellas and Hakka floral fabrics will also be held to offer a unique cultural experience to Japanese locals.

Now entering its third year, the Spotlight Taiwan program is sponsored by Taiwanese entrepreneur Samuel Yin (尹衍樑) to help promote Taiwan's soft powers to the world. The program currently enjoys participation from 33 academic and cultural institutions around the world.