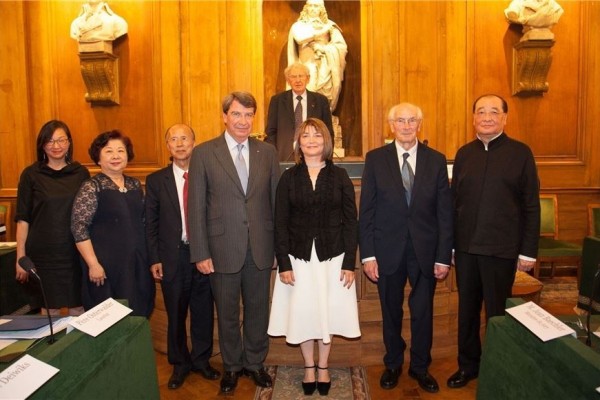 Culture Minister Hung Meng-chi (洪孟啟) hosted the 19th Taiwan-France Cultural Award ceremony in Paris on July 6. The annual event was jointly presented by the Ministry of Culture and the Academy of Moral and Political Sciences under the Institute de France.

For their outstanding research on Taiwan's culture, Dr. Fiorella Allio and Father Alois Osterwalder were chosen from 12 candidates to receive this year's Taiwan-France Cultural Award. Dr. Allio received the award for the French category, and Father Osterwalder received the honor for the European category.

Dr. Allio has been conducting research on Taiwan's culture for over 30 years, and her dissertation on traditional religious activities in Tainan well illustrates the importance of its spirit and value. Hsieh Kuo-hsing (謝國興), director of the Institute of Taiwan History, praised her efforts in exploring Taiwan's folk religions and beliefs by field study. Paul Jobin (彭保羅), former head of the French Centre of Research on Contemporary China, also lauded her professionalism in presenting Taiwan's culture from an objective point of view.

Father Osterwalder began his Chinese studies during the 1960s while attending school in Germany, which was where he met Taiwanese students such as composer and ethnomusicologist Shih Wei-liang (史惟亮). Their mutual interests led to the establishment of OAI, the predecessor of the East-Asia Research Institute at Bonn in 1965. Now in his 80s, Father Lsterwalder has not only contributed his cassette tape collection of folk songs, letters, and documents to Taiwan, but has assisted with the digitalization efforts as well. His lifelong dedication was a driving force in the preservation of Taiwan's folk music.

The Taiwan-France Cultural Award was founded in 1996 to promote cultural exchanges between the two nations. It was originally established to honor French allies, but has now expanded its scope to include all European nationals to encourage more professional research on Taiwan's culture. Dr. Allio and Father Osterwalder will both receive 25,000 euros for winning the prize this year.