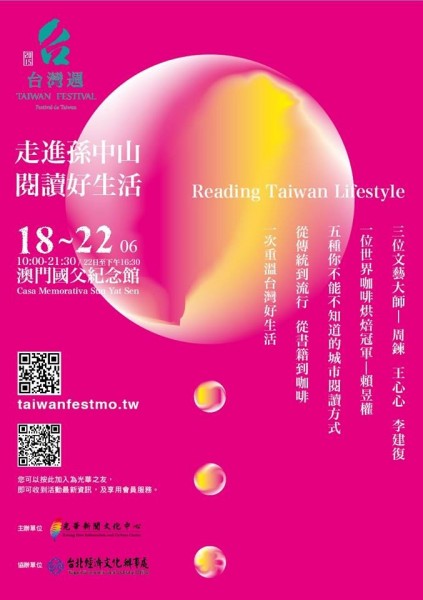 A festival introducing Taiwan's diverse culture will open on June 18 at the Casa Memorativa Sun Yat Sen in Macau. Organized by the Kwang Hwa Information and Culture Centre, the Ministry of Culture's overseas office in Hong Kong, the 5-day "Taiwan Week” will be held in Macau for the first time as exchanges in culture, education, and tourism have become increasingly frequent between the two sides.

The Centre has organized 12 activities ranging from concerts and forums to exhibitions, short films, and reading programs that will take place from June 18 to 22 at Casa Memorativa, where family members and relatives of the founding father of the Republic of China once resided.

Lu Chien-ying (盧健英), the Centre's director and organizer of the festival, noted that the whole project was inspired by the historical significance of the residence and Dr. Sun's time in Macau.

She said that in addition to the important role Dr. Sun played in shaping the collective memories of both Taiwan and Macau, the friends he made during his younger years in Macau later became important business partners and revolutionary compatriots. Thus, the organizers took the same approach of seeking new friendships through hosting the Taiwan Week festival in the hopes of deepening ties and enhancing cultural dialogue.

Following an opening performance by the Voco Novo a cappella group, Wang will lead the XinXin Nanguan Ensemble in a special collaboration with the a cappella group on stage at the night of June 19. Li will then present his famous folk songs on the next day.

Other scheduled activities include a seminar led by Chou on the afternoon of June 19, the screening of 8 short films on June 20 and 21, and a book-exchange activity on last day of the festival.

In addition, the ground floor of the former Mansion of Sun will be transformed into a reading space featuring nearly a hundred categories of graphic and audiovisual books relating to literature, art, design, and fashion. Organized by Taipei's Boven Magazine Library (boven 雜誌圖書館) and Macau's Pinto-livros (邊度有書) bookstore, the reading space will be available to the public for five consecutive days starting June 18.