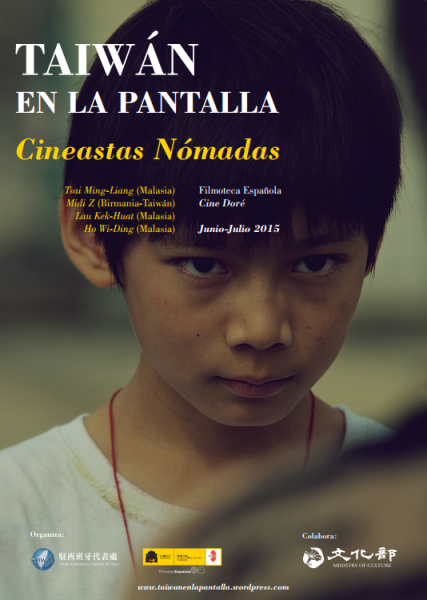 A Taiwan-centric film festival will be held in Madrid from June 14 to mid-July to discuss the contemporary trends of immigration and urbanization through the eyes of four foreign-born Taiwanese directors.

The featured filmmakers are Tsai Ming-liang (蔡明亮), Liao Ke-fa (廖克發), and Ho Wi Ding (何蔚庭), from Malaysia, and Midi Z (趙德胤) from Burma. All four are now closely intertwined with Taiwan's cinema and cultural scene, but they were all once new immigrants who viewed this island as their strange new world.

Irregardless of their place of birth and background, they chose to relocate to Taiwan in pursuit of their technicolor dreams. Now having earning their rightful position on the international stage, it's their cross-cultural backgrounds and leap of faith that have shaped and sharpened their lens.

"Taiwan en la Pantalla 2: Cineastas Nomadas,” or "Taiwan and the Silverscreen 2: Nomads of Cinema,” will kick off on June 14 at Cine Dore, one of the oldest and most charismatic cinemas in Madrid. A total of 14 films will be screened, including Tsai's "Stray Dogs (郊遊),” Liao's "When It Rains (雨落誰家),” Ho's "Pinoy Sunday (台北星期天),” and Midi Z's "Ice Poison (冰毒).”

The film festival is made possible with the support of the Taipei Economic and Cultural Office in Spain and Filmoteca Espanola, Spain's national film archive.