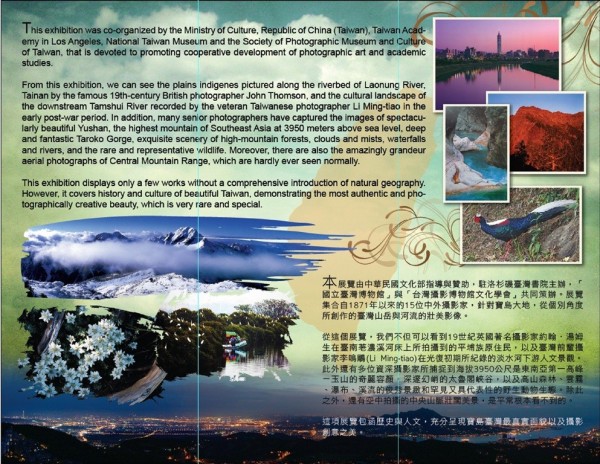 A traveling exhibition on some of the earliest photographic images of Taiwan has landed in Los Angeles to present a unique perspective on the island's natural and human landscape.

Running from June 1 through Aug. 31, "The View of Formosa's Landscape from Photographers” is hosted by the Taiwan Academy in LA and co-organized by the National Taiwan Museum (國立台灣博物館) and the Society of Photographic Museum and Culture of Taiwan (台灣攝影博物館文化學會).

The lineup includes many iconic sights that are now long gone, such as portraits of the plain aborigines who once dwelled on the dry riverbeds of Tainan (photographed by 19th century Scottish geographer John Thomson), and the daily life of early settlers along the Danshui River following the retrocession of Taiwan (captured by the late photographer Lee Ming-tiao, 李鳴鵰).

Also documented are indigenous vegetation and animals, as well as less-accessible scenery like the crest of Jade Mountain (玉山), the highest peak in southeast Asia; fog-shrouded Taroko Gorge (太魯閣), which boasts one of the world's largest natural enclosed spaces; and an aerial view of the Central Mountain Range (中央山脈), which splits the island into its eastern and western regions.

For more information about the exhibition on Formosa's landscape through the lens of 15 Taiwanese and foreign photographers, please contact the organizers at info@taiwanacademyla.org.