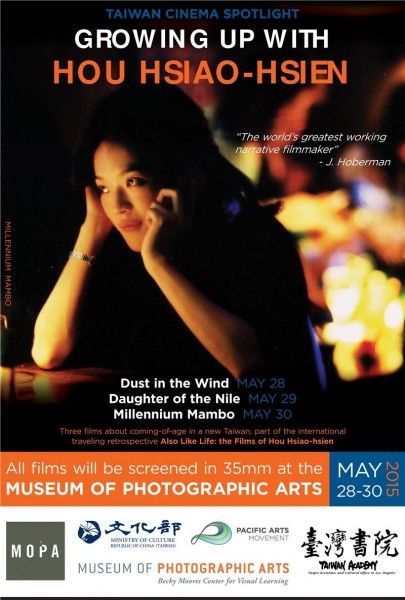 A three-day film festival exploring the concept of "coming-of-age in a new Taiwan” through the eyes of filmmaker Hou Hsiao-hsien (侯孝賢) will take place at the Museum of Photographic Arts in San Diego from May 28 to 30.

The three films chosen to highlight Taiwan's transition from an agrarian economy in the 1960s to an industrial powerhouse in the ‘80s are: "Dust in the Wind (戀戀風塵),” "Daughter of the Nile (尼羅河的女兒),” and "Millennium Mambo (千禧曼波).”

"Dust in the Wind” (1996) portrays the miles of expectations in love and work that have to be managed as the divide widens between countryside and urban regions; "Daughter of the Nile” (1997) focuses on the rapid marginalization of youths in contemporary Taipei; "Millennium Mambo” (2001) follows the psychological shifts that play out throughout a decade in the life of a bar hostess.

"Taiwan Cinema Spotlight: Growing Up with Hou Hsiao-hsien” is made possible with the support of the Taiwan Academy in Los Angeles, Taiwan Film Institute, Pacific Arts Movement, and Center for Moving Image Arts at Bard College.

Following each restored 35mm screening, guest speakers such as James Wicks, author of "Transnational Representations: the State of Taiwan Film in the 1960s and 1970s,” and Brian Hu, artistic director of the Pacific Arts Movement, will take the stage for Q&A sessions.

‘Growing Up with Hou Hsiao-hsien'