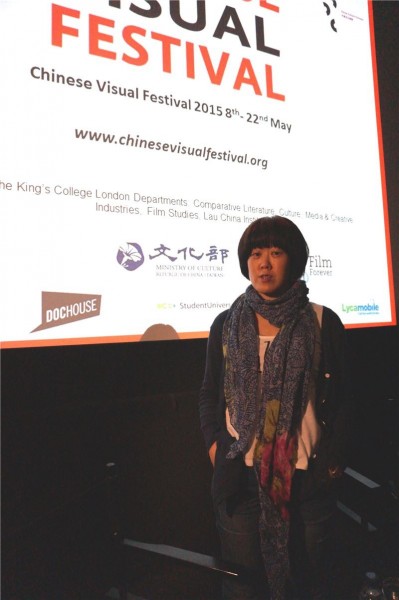 The director and featured artist both flew to London to participate in the May 14 screening at Bertha DocHouse cinema. Chen also took part in a Q&A session to field questions from audience members after the screening.

The Chinese Visual Festival running from May 7 to 22 is held concurrently at three sites:the British Film Institute (BFI) Southbank, Bertha DocHouse, and the Chelsea College of Arts.

This year, CVF has once again cooperated with the Ministry of Culture to offer a special segment called "Vision Taiwan,” which will screen documentaries, films, and experimental video art from Taiwan. The first film of the segment to be screened was "The Rice Bomber (白米炸彈客)” by director Cho Li (卓立) on May 9, preceding Chen's "Mountain Spirits.”

Chen's film left a deep impression on the British filmgoers. As an art lover, the filmmaker has spent most of her time in shooting different types of artists, such as dancers, sound artists, installation artists, and many others. Among those, she has taken ten years to film her newly released "The Walkers (行者),” and five years for "Mountain Spirits,” which documented Wang from 2009 to 2014.

The rising young director has gradually begun to reap the fruits of her hard work in recent years. She described the experience as a process of self exploration, rather like "a pas de deux” between a director and an artist.