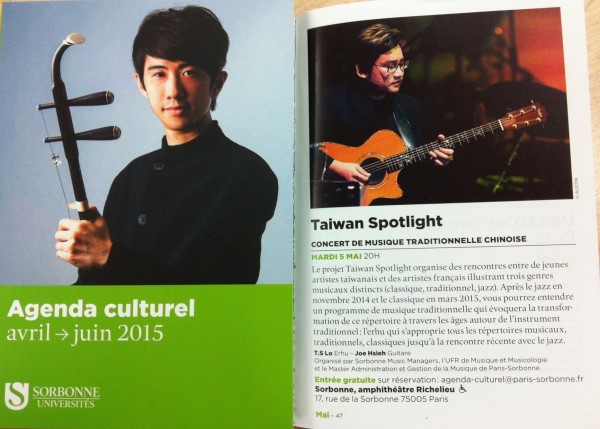 Erhu (二胡), a representative traditional Chinese instrument touted as the violin of the Orient, was paired up with western jazz in a trio of cross-cultural concerts held in France from May 5 to 7.

Jointly organized by the Ministry of Culture and the Sorbonne Music Managers, a professional association under the University of Paris-Sorbonne, the concerts brought together erhu musician T. S. Lo (羅堂軒) and guitarist Joe Hsieh (謝華洲

Titled "le concert de musique traditionnelle chinoise avec le jazz à venire,” the series' first performance was held at the public park grounds of the Cite International Universitaire de Paris on May 4, the second show graced the Richelieu Amphitheatre of the University of Paris-Sorbonne, and the grand finale was hosted by the St. Joseph Church in Dijon (Église Saint-Joseph de Dijon) on May 7.

The cross-cultural performances included familiar works such as "Words of the West Wind (西風的話)” and a new repertoire of works by Taiwanese jazz musician Norman Hsu (許治民) and French accordion player-composer Lionel Pinard.