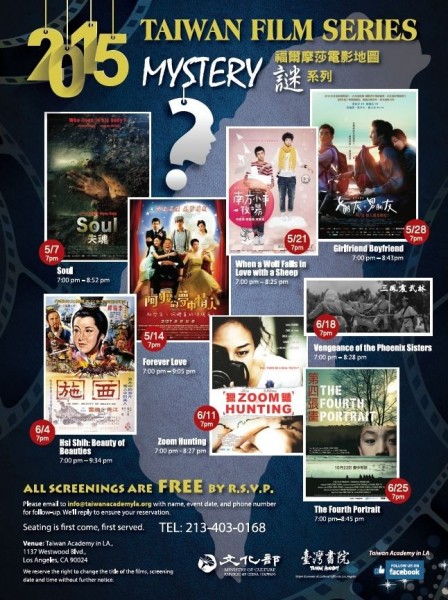 The Taiwan Academy in Los Angeles is set to kick off another admission-free film series, this time focusing on several different types of mysteries, from May 7 through June 25.

The series will start on May 7 with "Soul (失魂),” a supernatural thriller that leads the audience wavering between choosing psychological illness or demonic possession as the cause of the protagonist's isolation and disturbance. The film was Taiwan's entry to the foreign category of the Academy Awards in 2013.

May 28 will see the screening of "GF*BF (女朋友。男朋友),” a bittersweet coming-of-age story taking place against the backdrop of Taiwan under martial law in the 1980s. The award-winning film was lauded for its handling of politics and homosexuality.

Two classic movies from early Taiwan — "Hsi Shih: Beauty of Beauties (西施),” which was first released in 1964, and "Vengeance of the Phoenix Sisters (三鳳震武林)” from 1968 — will also be screened in Los Angeles respectively on June 6 and 18.

Rounding up the mystery-themed series is "The Fourth Portrait (第四張畫),” an atmospheric film whose exquisite cinematography and use of color saturation belies its less-poetic subjects of domestic violence, displacement, and loss.