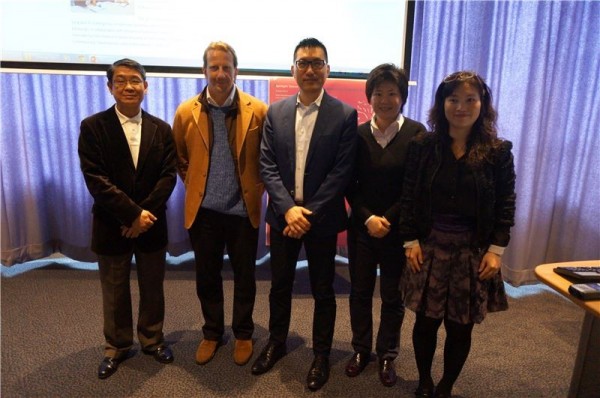 The 2015 Spotlight Taiwan season at the University of Edinburgh kicked off on May 1 with a lecture on future media and the making of trans-disciplinary art by Taiwanese entrepreneur Wang Jun-jieh (王俊傑).

As an award-winning artist, designer, and educator, Wang is currently serving as new media professor at the Taipei National University of the Arts. He described Taiwan's arts environment as relatively conservative as a whole — a condition he has been challenging over two decades.

As part of his efforts to promote new blood and ideas in Taiwan's artistic arena, Wang has advocated the use of venues other than museums and fine art galleries for exhibitions, and the use of digital lights and sound to stage a theater play with no human actors.

Wang's presentation on his new media vision was followed by a speech by Dr. Felix Schober, an independent German curator who has participated in the design of the Taiwan Pavilion at the Venice Biennale in 2009 and 2011. The two presenters drew an audience of more than fifty art professionals and students.

The 2015 Spotlight Taiwan in Edinburgh will explore the twin themes of mobility and imagination. This year's lineup include famous writers such as Ang Li (李昂) and other contemporary Taiwanese artists. The Edinburgh International Film Festival will also host a special showcase on Taiwanese film directors from June 17 to 28.

Follow the yearlong series as it unfolds across Edinburgh at: https://twitter.com/spotlighttaiwan.