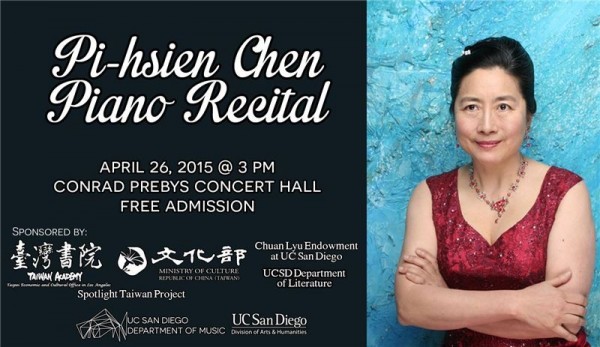 Chen Pi-hsien (陳必先), an accomplished Taiwanese pianist who was recognized as a child prodigy, will hold a solo concert at the University of California, San Diego (UCSD) on April 26 as part of the university's collaboration in the Spotlight Taiwan project.

Born in Taiwan, Chen took up piano lessons at the age of four, relocated to Cologne at the age of nine, and enrolled in the Cologne University of Music a year later. She went on to win the first prizes at the ARD-International Piano Competition in Munich, the A. Schoenberg Competition in Rotterdam, and the J.S. Bach Competition in Washington D.C.

The pianist is best known for her interpretation of Mozart's sonatas, which she will bring to life at UCSD on April 26, along with a repertoire of selected pieces fromBeethovenand Chopin, as well as compositions written by Taiwanese composers Lee Tzyy-sheng (李子聲), Yang Tsung-hsien (楊聰賢), and Lin Ying-ting (林盈婷).