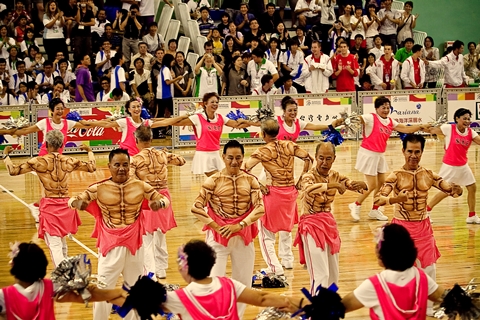 A Taiwanese documentary about Kaohsiung-based cheerleaders averaging 70 years of age premiered in Tokyo as part of the Yomiuri Culture Center's (讀賣新聞文化中心) participation in the Spotlight Taiwan project.

"Young at Heart: Grandma Cheerleaders” (青春啦啦隊) documents an elderly team comprised of eight grandfathers and 32 grandmothers over 300 days as they prepare for the biggest performance of their lives at the 2009 World Games in Kaohsiung.

The 2009 documentary was produced by Golden Horse Award-winning director Yang Li-chou (楊力州), who shared his thoughts with the Japanese audience at a forum held after the premiere in Iino Hall of Tokyo on March 28. The event was jointly organized by the Ministry of Culture and the Yomiuri Culture Center of Japan.

As both Taiwan and Japan are faced with the social challenges that come with a graying population, the film hopes to encourage senior citizens to plan their retired life ahead of time, said Yang.

The cooperation between the Ministry and the Yomiuri Culture Center has now entered its second year. This year's lineup will offer nine events on Taiwanese culture in Tokyo, including cooking classes on Taiwanese cuisine, and forums on the diverse heritage of Taiwan, such as the aboriginal Siraya tribe (西拉雅族) and the Taiwanese Hokkien dialect.