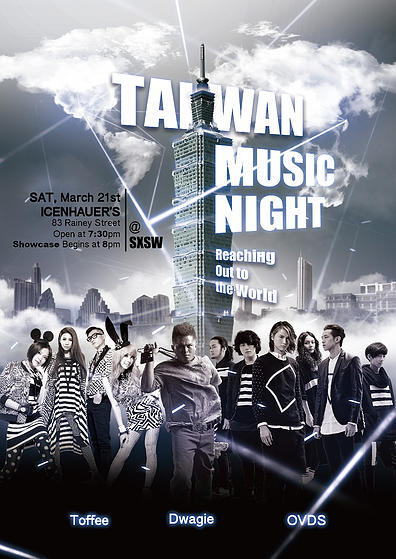 Dwagie is a Taiwanese rapper, songwriter, and TV personality who uses hip-hop to address social concerns. He is also the only rapper who has ever collaborated with both American hip-hop artist NAS ("Refuse to Listen”) and the Dalai Lama ("People”).

The four-piece Toffee, named after the Western confection of melted caramel and butter, uses traditional Chinese instruments to make music with a Western zeal. True to its namesake, the band breaks down musical elements from both East and West, and creates unique arrangements that share the characteristics of both cultures.

The three acts will perform on March 21 at the historic Icenhauer's, a renovated architectural gem first erected in 1895 as a traditional wing-and-gable house in downtown Austin.

Taiwanese delegates will also network at a March 19 forum titled "Brandvertising: The Main Path for Artist Marketing,” while a Taiwan Pavilion at the Austin Convention Center will showcase information about Taiwan's artists and music awards to pursue collaboration opportunities such as concerts, movie soundtracks, and digital releases.