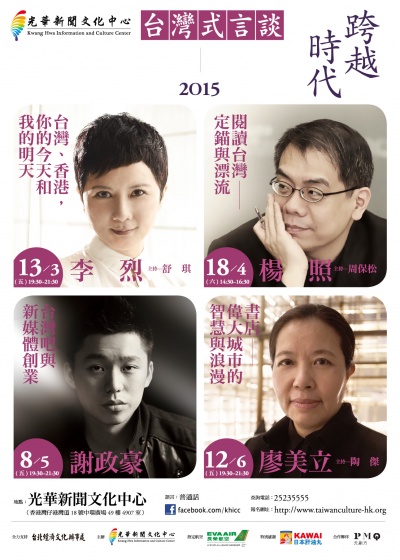 Established in 2010, "Talks a la Taiwan” has grown into a major exchange platform among cultural professionals from Taiwan and Hong Kong. Iconic figures from the creative sector are invited to speak at the forum on topics echoing the social trends and contemporary thoughts in both regions, thus cementing its status as a popular event in Hong Kong.

The first speaker, Lee, was a popular actress in Taiwan who later became a film producer when Taiwan's cinema market hit rock bottom. She has since successfully produced several blockbusters including "Orz Boys (囧男孩),” "Monga (艋舺),” and the critically acclaimed "Meeting Dr. Sun (行動代號：孫中山)” in recent years. Hong Kong, where the once-booming cinema market now faces many challenges, may be able to learn from her experiences.

Writer-critic Yang, whose expertise ranges from literature, social critique, to media, is scheduled to speak with Hong Kong writer Chow Po Chung (周保松) about the different perspectives on Taiwan on April 18.

The third talk will be given by 24-year old Hsieh, who established "Taiwanbar,” a website featuring humorous animations about Taiwan's history. The studio shot to fame with one of its films that received 700,000 online hits. Hsieh will share his team's story of changing the course of education through digital content on May 8.

The final talk on June 12 will feature Liao, CEO of Taiwan's Flâneur Culture Lab. The former Eslite Bookstore executive has helped the leading Taiwanese bookstore chain expand to more than 50 branches and later led the opening of Fangsuo Bookstore, now a cultural landmark in Guangzhou. Liao will talk about what she thinks about bookstores and cities as well as creative industries in the 21st century with Hong Kong writer-critic Chip Tsao (陶傑).