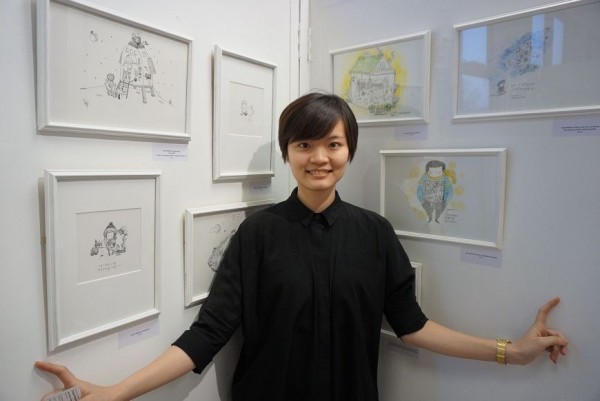 A two-part cultural festival highlighting the Taiwanese spirit has been organized by the University of Surrey under the auspices of the Spotlight Taiwan project, an international partnership program launched by the Ministry of Culture and financed by Taiwanese entrepreneur Samuel Yin (尹衍樑).

The first part of Taiwan Week, aptly named "Thinking Taiwan: Young Artists and Society,” kicked off on Feb. 9. Up-and-coming artists such as painter Klara Huang (黃盈睿) and photographer Joan Huang (黃于倩) were featured in the opening event "When The Night Blossoms — All About Life,” a private art exhibition detailing their perspectives on the recent youth movements and social activism taking root across the island.

Two screenings were also held to showcase "The Right Thing (廣場),” a documentary on the 2008 student protests dubbed the Wild Strawberry Movement, and "22:30,” a short film examining Taiwan's around-the-clock work culture. Director Chiang Wei-hua (江偉華) flew to UK to discuss his films' underlying themes and gave an exclusive preview of "The Mob (街頭),” the upcoming sequel to "The Right Thing” that covers the 2014 Sunflower Movement.

The art exhibition will run through March 6 at the Lewis Elton Gallery on the Surrey campus, and the second leg of Taiwan Week will take place in May. Themed "Hearing Taiwan: Taiwanese Dance and Music,” the performance-oriented activities will include showcases by T.T.C. Dance and the Heidelberg Taiwanese Drama Group.