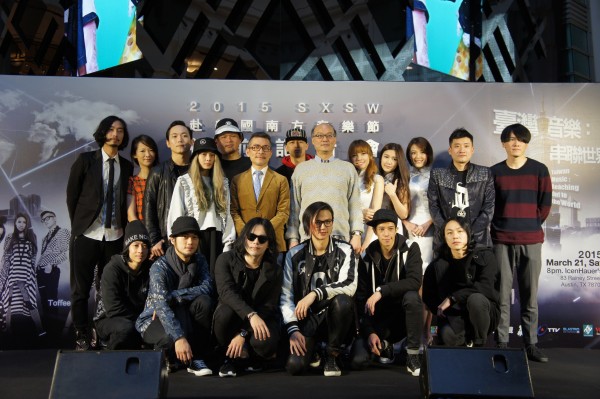 The Bureau of Audiovisual and Music Industry Development held a press conference at the iconic Taipei 101 on Feb. 3 to announce that Taiwan will be represented by hip-hop artist Dwagie (大支), electronic rock band OVDS, and fusion indie band Toffee (太妃堂) at the upcoming South by Southwest Music Conference and Festival (SXSW) in Austin, Texas.

Scheduled for March 13to 22, the 2015 SXSW will feature a Taiwan Night at the historic Icenhauer's, a renovated architectural gem first erected in 1895 as a traditional wing-and-gable house in downtown Austin. The Bureau hopes that the familiar Southern atmosphere combined with fresh, unconventional sounds will submit American music fans to the infinite charms of Taiwanese music.

The first SXSW was held in 1987 in Austin, and the music event has since gradually grown and diversified to become the world's largest business exhibition with music as its core, incorporating fringe events that cover film, interactive technologies, and fashion.

It has also positioned itself as an important stage for cultural and creative startups and digital technologies to showcase music-related trends. The annual event attracts more than 2,000 music groups, over 100,000 music fans, and some 3,000 media reporters from around the world.

This year, the Bureau has also forged a new partnership with Taipei 101 to help jointly promote Taiwan's international image as a pop music and fashion capital. Taiwan has long been a cradle for Chinese-language superstars, and the potential of combining their high visibility with Asian fashion brands will help attract international funds to fuel the burgeoning Chinese-language music market.

A Taiwan-themed forum will also be held at the 2015 SXSW, in which Taiwanese and American music industry professionals will discuss the business model of introducing international brands to the greater China region through Taiwanese artists, which will not only boost the value of Taiwan's pop music industry but also secure Taiwan's leading status in the global Chinese-language market.