Deputy Minister Hung Meng-chi (洪孟啟) officially took the helmat the Ministry of Culture on Jan. 26. As he received the appointment document from Minister without Portfolio Jayclyn Tsai (蔡玉玲), he praised his predecessor Lung Ying-tai (龍應台) for laying down a strong foundation by formulating new cultural policies and stated that he will strive to take the Ministry to the next level by combining technology with culture to boost Taiwan's soft powers.

Minister Hung noted that his predecessor had laid a solid foundation for cultural development during her tour of duty and that the Ministry of Culture finished its first milestone journey under her planning, leadership, and boldness of vision. He promised to continue promoting her policies by "pragmatically and systematically resolving problems and not sidestepping any issues.” He also stressed that he will put into practice the philosophy of "paving way for successors” by earnestly addressing the roots of each issue to allow good policies to truly blossom over the years.

In response to the importance of combining culture with technology, an issue raised by Minister Tsai, he replied that "regardless of what happens, I definitely will take the steps to put that into motion.” He also mentioned that he has provoked a lot of discussions and replies since posting on Facebook the idea of renting out historic monuments through public tender after attending a recent information technology course organized by the Executive Yuan.

Minister Hung noted that through Facebook, some local cultural figures began to communicate with members of the general public who were concerned about cultural issues, and their discussions brought up many valid points, including the policies guiding the revitalization and utilization of historic monuments in Europe.

He said he fully understands that it's painstaking to promote cultural work because of his own experience in cultural administration and he welcomes all public adviceand opinions on cultural policies, but he also expects the society to give its support to good cultural policies. He expressed the hope to lead the Ministry of Culture onto the next miles of road ahead and that the original and good policies will not be terminated just because of change in management.

With a doctorate in East Asian studies from National Chengchi University, Minister Hung has served as director of the Taiwan Provincial Government Department of Cultural Affairs, department head of the Council for Cultural Affairs, secretary-general of the Taipei County Government, and deputy minister of the Ministry of Culture. He has also taught extensively at many universities, including the Taipei National University of the Arts. The Ministry of Culture looks forward to breaking new ground under the leadership of such a person rich in experiences in the field of cultural affairs. 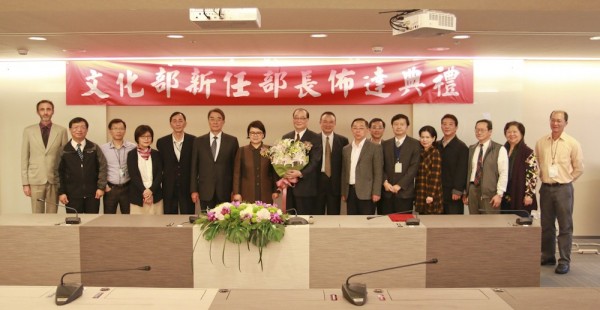