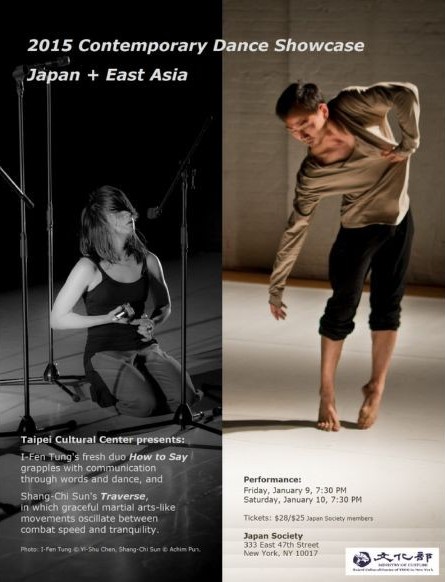 Sun's "Traverse” is a graceful solo in which martial arts-like movements oscillate between combat speed and tranquility. Sun, the founder and artistic director of the eponymous Shang-Chi Sun Company (崎動力舞蹈劇場), has previously danced with prestigious dance companies Sasha Waltz & Guests and Taiwan's Cloud Gate Dance Theatre (雲門舞集). His performance in December Dance last month in Brugge was lauded "a joy to behold.”

Tung's "How to Say,” which was produced by Taiwan's M.O.V.E Theater (動見体劇場), has been staged twice in Spain in 2012 and 2013, as well as in Singapore and Malaysia last year, before its premiere in North America on Jan. 9 and 10. The work incorporates dance, drama, and several performing art forms and skillfully fuses performers' bodies, sound effects, and stage lines with the performance. It is an attempt to discuss the mental conditions among individuals and groups through the body, languages, and sounds.

As the biggest non-profit organization for performing arts, APAP has members from around the world. Its annual conference takes place in New York City every January and attracts art agents who watch the showcases for prospective program purchases.