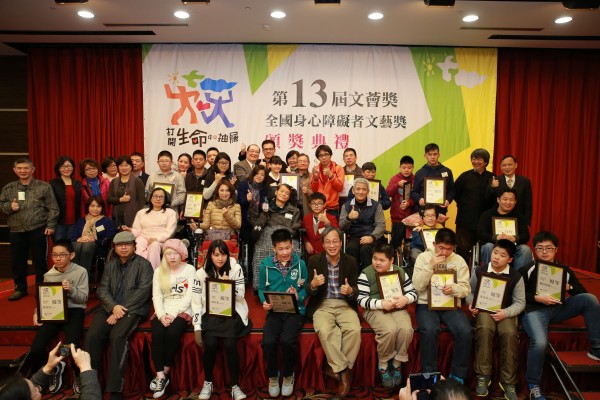 The awards ceremony for the 13th Enable Prize - the National Literary Awards for the Physically or Mentally Handicapped - was held at the NTUH International Convention Center in Taipei on Dec. 30. Acting Minister of Culture Hung Meng-chi (洪孟啟) and pivotalfigures fromlocal literary and art communities such as Hsiao Yeh (小野), Wu Chun-yao (吳鈞堯), and Lin Dai-man (林黛嫚) attended the ceremony to provide the 2014 awardees with encouragement and affirmation.

A total of 1,428 creative works by participants aged between 6 and 80 were entered into the competition for the 13th awards themed "Opening the Drawer of Life,” with their paintings and writings showing stunning inclusiveness and richness through the perspective of different age groups. A judge panel chose 32 winning entries for cash prizes of between NT$30,000 and NT$90,000, while the top three winners in the literary and artistic categories for the college/adult group were conferred liuli glass trophies.

Hsiao Yeh, on behalf of the review committee, said that physically and mentally handicapped individuals needed not sympathy and commiseration but understanding, noting how he personally was greatly touched and learned a lot during the process of reviewing all the entries.

Pu Yu-hsuan (璞玉瑄), the first prize winner in the college/adult group, deeply moved readers in her work "The Baby Snowman” by describing with meticulous wording the excruciating pain of a mother who has seen her child suffer, drawing an analogy between a melting snow sculpture and the disappearing life of her sick child.

Wu Ya-rong (吳雅蓉) won the second prize of the college/adult group with her work "That Bowl of Eel Blood,” which told the story of how her mother worked hard to boil a bowl of eel blood with Chinese medicine day after day in order to relieve the pain she suffered when she was a child. Both authors have fully demonstrated the power of words, noted Hsiao Yeh, a prominent writer himself.

Acting Minister Hung stated that all awardees are "angelic messengers” sent by God to demonstrate courage and fortitude in the face of life's setbacks. He concluded that both disabled and non-disabled groups should learn to respect all things on earth and savor the story of life so as to live in fulfillment because life is a learning process. 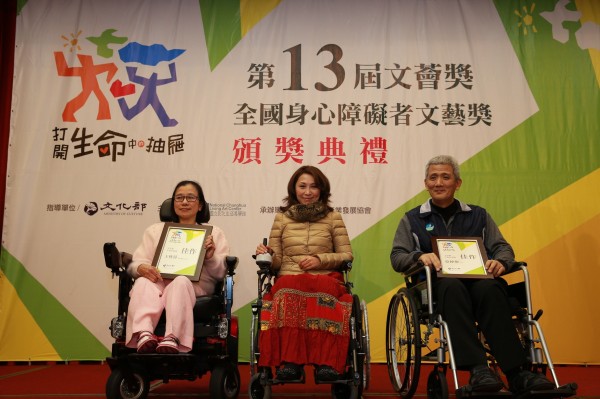