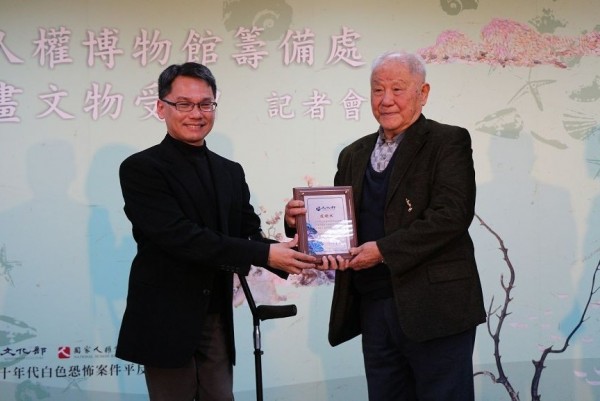 The Preparatory Office of the National Human Rights Museum accepted the donation of 13 seashell paintings left behind by the late White Terror victim Lin Yueh-sheng (林粵生) on Dec. 23 at a Taipei press conference, with some 40 former political victims and their family members attending to commemorate the memory of him and his fellow Green Island inmates.

Upon seeing the seashell paintings from the 1950s, the former political victims began to share their collective memories on those tragic days they spent in imprisonment on Green Island. They recalled that some prison artists used sea urchin spines or small abalone shells, while others scooped sands with their hands and used mesh wire to sift small shells. They had also picked up shells in caves below sea level when the tides receded.

Director Wang Yi-chun (王逸群) of the Preparatory Office of the National Human Rights Museum said although Lin passed away, his shell paintings served as a witness of history, for preserving a specific artifact is to preserve a story of life and a page of history. The Preparatory Office is also faithfully preserving the experiences of political victims' sufferings through writing and documentaries, in the hopes of promoting history education and the concept of human rights.

Although two of the 13 shell paintings were in a poor state, but they have since been restored to their original appearance by a skilled conservator and will be stored in a storeroom kept at constant temperature and humidity. The National Human Rights Museum will continue to repair other damaged White Terror era artifacts so as to let fine craftsmanship co-exist with historical memories and showcase the history of Taiwan's human rights development through exhibitions in the future.