Six short films by Taiwanese art students will be screened at the Poitiers Film Festival in France from Nov. 28 to Dec. 7 as the event features Chinese-language films this year.

The French festival inaugurated 37 years ago was originally a platform for local film students to showcase their graduation works. The event has since grown to become one of the major platforms for film students around the world to exchange their views and for industry professionals to discover new talents.

The festival is centered on a short film competition, with 40 out of the 1,400-plus submissions to be screened during its 10-day run. A variety of activities, including forums, workshops, keynotespeeches, and concerts will also roll out for film students and instructors to network and learn from each other.

The six submissions from Taiwan were made by students from the Taipei National University of the Arts and the National Taiwan University of Arts : "He is a Dog in My House” by Tsao Shih-han (曹仕翰), "No Way Home” by Shih Li (施立), "The Pool Man” by Zhan Kaidi (詹凱迪), "Attention, Please” by Lu Pei-ting (呂珮亭), "Daily Life” by Chang Chia-yun (過站), and "Chicharon” by Rina B. Tsou (鄒隆娜).

The festival also has a special "Taiwan Focus” segment that will screen one of director Hou Hsiao-hsien's (侯孝賢) all-time classics, "Three Times,” on Nov. 30.

More information can be found at: www.politiersfilmfestival.com. 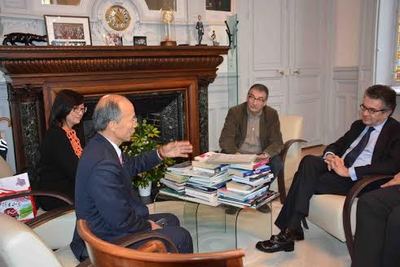