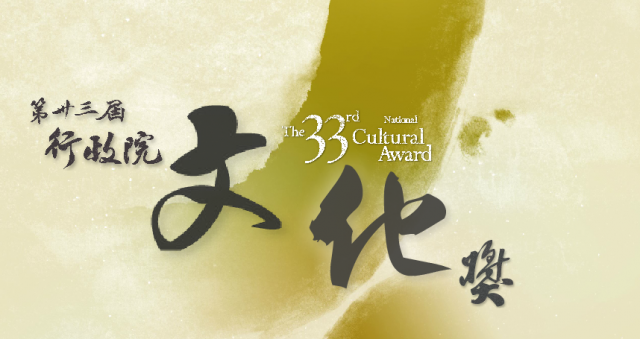 The Ministry of Culture announced the recipients of the 34th Executive Yuan National Cultural Award, Taiwan's top cultural honor, on Nov. 24. Author and literary translator Chi Pang-yuan (齊邦媛), poet-writer Yu Kwang-chung (余光中), and the late architect-scholar Han Pao-teh (漢寶德) will be honored by the premier in an awards ceremony on Feb. 9, 2015.

The National Cultural Award honors the lifetime achievement of cultural figures. This year's three recipients all commanded prestige in their own fields, said Culture Minister Lung Ying-tai. Their works and achievements were not only influential both at home and abroad, but their discourses and ideas encouraged more people to join their professions as well, thereby taking Taiwan's historical studies, poetry and prose writing, and architecture to a new level, the Minister added.

Chi is recognized for her long-term efforts in systematically promoting the translation of Taiwan's modern literature into English. She also helped found the National Museum of Taiwan Literature and has made considerable contributions to Taiwan's literary scene. Her epic autobiography "The River of Deep Torrents” (巨流河) is a witness to her family's migration from mainland China to Taiwan over six decades ago during the Chinese Civil War.

Yu, a household name in Chinese-speaking communities, has been writing and translating both Chinese and English literary works for over half a century. Described as capable of "writing poetry with the right hand and using the left hand for prose,” his achievements are unparalleled. Yu's literary works are widely known and many of them are included in Taiwan's textbooks, having far-reaching influences on Taiwan's Chinese-language education and humanities studies. Moreover, his poetry also inspired a folk music movement among students in the ‘70s and many verses were made into songs.

Architecture scholar Han, who passed away earlier this month, was knowledgeable about Chinese and Western culture, and his ideas about architecture developed from history, aesthetics, and environmental ethics have remained an influential force in Taiwan. As early as four decades ago, Han was a pioneer in the restoration of cultural heritage such as the Changhua Confucius Temple. He then founded the Tainan Academy of the Arts (today's Tainan National University of the Arts) and helped create Taiwan's first museum studies institute. Han also offered a bigger picture of Taiwan's art education potential by writing for newspaper columns.

"All three elders have served as running water to irrigate Taiwan's culture,” the Minister concluded.