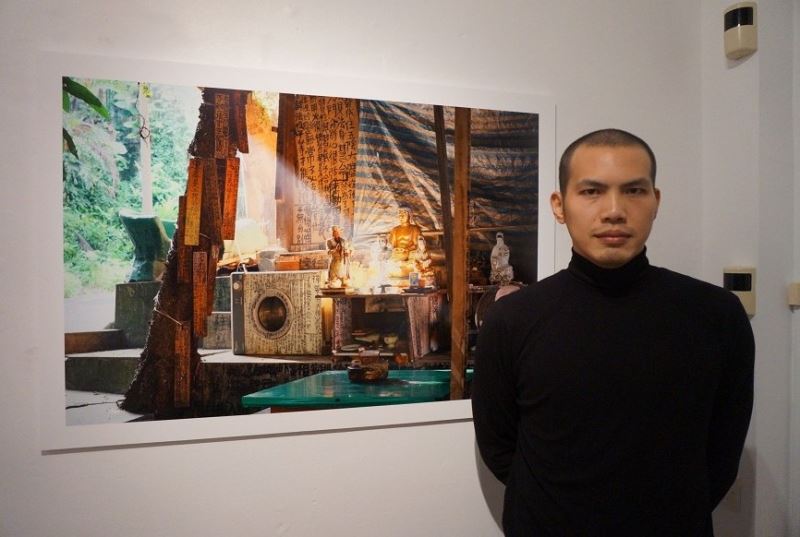 The University of Surrey launched its first event — Taiwan Week — on Nov. 17 after becoming a partner in the Ministry of Culture's Spotlight Taiwan project. Phil Powrie, dean of the university's Faculty of Arts and Human Sciences, thanked the Ministry of Culture at the opening speech for introducing Taiwan's fine culture to the British people.

Lee, who was still a sound artist three years ago, came to new realizations about life and art through his yoga practice. Later, he paused his sound art career and turned to photography, visiting places around Taiwan, particularly the outskirts, and conveying his thoughts through camera lenses.

The "Frames In-Between” series are meaningful in three ways, said Lee. The first one is on a cultural level in reference to Taiwan's special collage of cultures resulting from different colonization influences. The second refers to the in-between areas between cities and countryside, and the conflicts as well as integration between landscapes and ordinary people's lives. The final layer is the in-between of the artist's mind as he went from sound art to photography.

Tsai's film contains interviews of faculty and students of a school for the visually-impaired. They were among the worst victims of the oil contamination incident three decades ago. The filmmaker juxtaposes the victims with the political victims of the Kaohsiung Incident under Taiwan's martial law, which took place in the same year when the contamination scandal broke out.

He said both these special groups of people were seen as "victims” at that time, but some of the political victims ultimately became influential politicians, compared with the contamination victims, who ended up a disadvantaged minority group that has never been treated with equity and justice.

Tsai and Lee will give a talk on Nov. 19 and discuss how artists present Taiwan's cultural diversity through art creations from their perspectives with Professor Powrie and Professor Chris Berry at the King's College London, and with Taiwanese scholar Ming-Yeh Rawnsley at the University of London's SOAS.