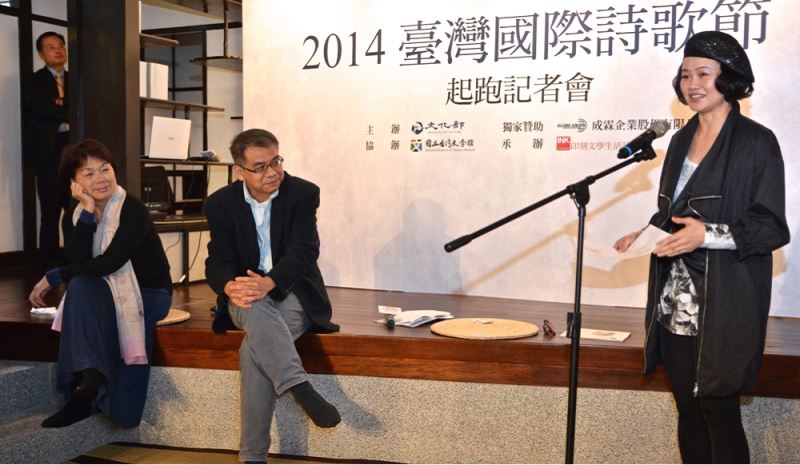 The first Taiwan International Poetry Festival will be promoting poetry from around the world with a series of events, including a film festival, a concert, and a book fair that are set to roll out over the next two months. Poets from Cuba, New Zealand, Japan, South Korea, and mainland China will also visit Taiwan to give speeches and attend other poetry-related activities.

Some 30 Taiwanese poets, including Malaosz Monaneng (莫那能), Chang Mo (張默), and Kuan Kuan (管管), gathered at the Qidong Poetry Salon in Taipei on Nov. 12 in a warm-up event for the festival. They recited poems at the salon, which was renovated from several old government officials' dormitories built between 1920s and 1940s during the Japanese colonial period.

Culture Minister Lung Ying-tai said at the gathering that she was very touched to see the poets "return home” to the salon, which she described as "a pure and peaceful” corner. She also said that poetry is like a "cold spring” that helps people think calmly.

The poetry festival is set to open with the "Poetry Film Festival,” which includes the screening of several classics such as Ernst Ingmar Bergman's "Cries and Whispers” and award-winning 1960 film "The Testament of Orpheus,” to help the audience to appreciate poetry through films.

Other programs include "Crossing the Boundaries of Poetry” on Dec. 15, which will feature joint poem recitals from renowned China-born Taiwanese poet Xi Murong (席慕蓉) and poets from other countries; a concert that is also scheduled for the night of Dec. 15 the Taipei Zhongshan Hall; and a book fair on Dec. 28.