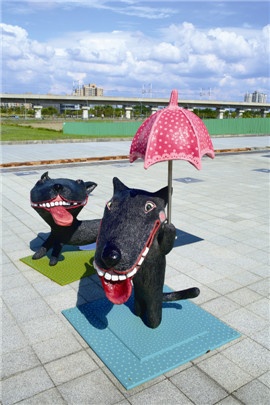 The Southern Taiwan Science Park was honored with the "Outstanding Award” of the fourth Public Art Awards on Nov. 6 for its long-term efforts in creating a beautiful environment and integrating art with daily life for local residents through an annual art festival.

The fourth Public Art Awards ceremony recognizes local public art projects installed between 2011 and 2012. Twenty out of 130 applications went through three stages of review, in which the judges even visited the outlying Kinmen Islands to inspect a project there.

Among the other award recipients this year is the art installation at the Taipei Rapid Transportation System's Luzhou Station, which won one of the three Best Creativity Awards. The project includes a huge feather-shaped glass-and-stainless steel installation that is suspended in the air from the rooftop of the underground metro station.

Ching Gou Elementary School in Yilan County won the Best Education Promotion Award with three gift box-shaped stone installations decorated with mosaic tiles, while the Kinmen art project won the Best Environmental Integration Award for its ceramic chair-like installations, which are a re-making of "Xioudun,” a piece of ancient furniture in the Ming Dynasty.

More information can be found at: www.publicartaward.com.tw