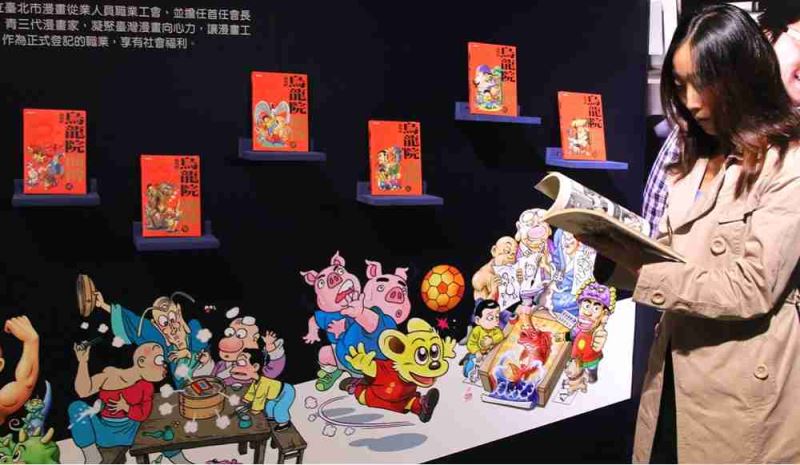 Culture Minister Lung Ying-tai presented the Lifetime Achievement Award of the 5th Golden Comic Awards, the top honor for comics in Taiwan, on Nov. 4 to cartoonist Ao Yu-hsiang for his three-decade contribution to Taiwanese comics.

Ao, who was physically weak and could not regularly attend school when he was young, grew up enjoying drawing and sketching. He first rose to fame after publishing his "Black Dragon Courtyard” comic strip series in a local newspaper in 1980. The series, which ended in 2012, has sold more than 43 million copies worldwide over the last 32 years.

As the longest-running original comics in the Chinese-speaking world, the humorous "Black Dragon Courtyard” has also been adapted into films and released in Europe and the Middle East.

The Minister lauded Ao for the wide adaptation of his comics, which have been made into novels, TV programs, films, video games, and animations, adding that his works allow generations of children in Taiwan to be able to "read our own comics and develop their own cultural imagination.”

After working in the profession for decades, Ao admitted that there are few local comics seen on bookstore shelves in Taiwan, but encouraged "my fellow cartoonists not to neglect our own works despite the harsh environment.”

Lung also revealed that the annual Taipei International Book Exhibition (TIBE), which takes place in Taipei every spring, will feature a graphic novel co-produced by three Taiwanese cartoonists and one New Zealand artist next year.

Best Chi-ya Chang, winner of this year's Best New Comic Artist award, began drawing comics at 19, while +ZEI+, who won the Best Young FemaleComic Award, said that she had insisted on drawing what she really found interesting. Last but not least, the Best Comic Grand Prize went to Sean Chuang's "'80s Diary in Taiwan.”

Moreover, several artist villages in New Zealand and France have also invited Taiwanese cartoonists to join their residency programs, the Minister added. By promoting Taiwan's comic arts through various channels, the Ministry of Culture aims to draw more attention to original comics both at home and abroad.