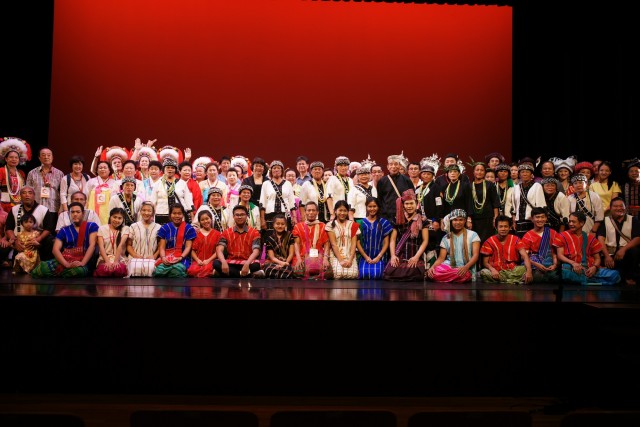 Themed "East Asia Crescent - Tea．Stomping Dance．Shining Forest,” the 13th Asia-Pacific Traditional Arts Festival took place in Yilan from Oct. 23 to 26 to showcase the rich heritage and artistic expression shared by those cultures within the Asia-Pacific region. This exchange with Southeast Asia also echoed the directive of the Ministry of Culture's "Emerald Initiative” program, which invites Southeast Asian artists to explore Taiwan.

This year, the festival was organized based on the Lucidophyllus Cultural Belt, a theory first proposed by Japanese ethnologists Komei Sasaki and Tomoaki Fuji in the 1980s. Seven domestic and foreign teams were also invited to deliver competing performances that reflect the common lives of ordinary people as well as features of traditional art in the Asia Pacific.

Wu Rong-shun (吳榮順), president of the Taipei National University of the Arts' School of Music and organizer of the festival, said the crescent region begins in Nepal and extends to Southeast Asia, Southwest China, Taiwan, South Korea's Jeju Island, and Japan.

This region is populated by the growth of tea plants, is considered a homologous cultural district, and shares a similar lifestyle and many common forms of artistic expression, he explained.

Moreover, the "shining forest” highlighted as part of the event's theme points to the proliferation of broadleaf evergreens that thrive on this band of land, providing a canopy thathas helped to shape a common lifestyle that include the consumption of fermented goods, the construction of stilt houses,and the prevalence of matrilineal social structures.

Wu noted that the 2014 Asia-Pacific Traditional Arts Festival further strengthened bilateral cultural exchanges by arranging for the foreign teams to visitTaiwan's aboriginal tribes, and holding a special exhibition showcasing stilt house designs, tea-drinking traditions, and handmade crafts in Yilan that will run through the end of the year.

Festival organizers expressed the hope of encouraging the people of Taiwan to interact with their counterparts from the Asia-Pacific region through the presentation ofcross-border culturalthemes and common elements. The festival ended with a high note surrounding a profound sense of participation and cultural identification.