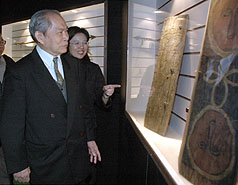 The Executive Yuan has approved an application submitted by the Ministry of Culture for a posthumous commendation to Dr. Chen Chi-lu (陳奇祿) in recognition of his outstanding contributions to the establishment of the Council for Cultural Affairs, the formulation of cultural laws and regulations, the strengthening of local cultures, the preservation of cultural heritage, and the nation's overall art and cultural development.

Minister of Culture Lung Ying-tai explained that Dr. Chen had pioneered the cultural construction of Taiwan and really understood that seasonal rites, social customs, and folklore embedded in aboriginal tribes and rural villages were the underlying elements sustaining the Taiwanese culture.

He had established laws and regulations as well as institutions that would pass on art and cultural knowledge, while striving for the integration of culture's beautiful qualities into people's daily lives. "He had given cultural nourishment to the life of common people at the grassroots level and enabled art and culture groups to take roots and grow. The cultural construction and development in Taiwan over the past three decades have actually been based on the foundation laid by Dr. Chen Chi-lu,” the Minister noted.

Dr. Chen, a former academician of Academia Sinica, died of illness on Oct. 6. To honor his last wishes in donating his hand-drawn sketches of aboriginal culture and calligraphy works to the National Taiwan Museum and the National Museum of History, the Ministry of Culture will make the donation on his behalf as soon as possible and sponsor a public exhibition in the future as a token of gratitude for his lifelong contributions to Taiwan's culture.

Dr. Chen was tasked with the establishment of the Council for Cultural Affairs, the predecessor of the Ministry of Culture, shortly after submitting "The Strengthening of Cultural and Recreational Activities Program” to the Executive Yuan in 1981.

During the eight years he served as the first minister of the Council for Cultural Affairs, he had devoted himself to safeguarding Taiwan's traditional heritage, preserving and perpetuating aboriginal cultures, promoting art and cultural subsidies, strengthening the characteristics of local communities, and establishing the system of cultural laws and regulations that laid the foundation for Taiwan's cultural development.

Lung pointed out that during his eight-year tenure, Dr. Chen had promoted the enactment of several major cultural laws, including the Enforcement Rules of the Culture and Arts Reward Act and the Cultural Heritage Preservation Act, and advanced cultural matters with a strict professional attitude, allowing the cultural community to enjoy the benefits of his hard work even today.

Dr. Chen was also a famous calligrapher and was exceptionally achieved in the writing style of Wei tablets, which is evidenced by the characters "Presidential Palace” he wrote on the plaque above the gates of the Presidential Palace, a designated national monument. ”The art and culture community will always remember the outstanding contributions made by our cultural construction pioneer,” the Minister concluded.