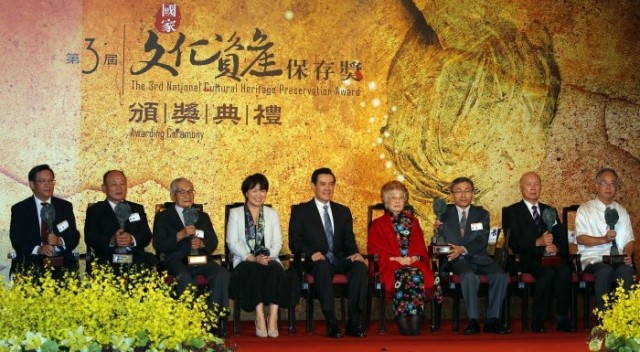 Tai received the "Special Jury Award” for her efforts in promoting Peking opera, while Wang was recognized for his craftsmanship in lacquerware.

Culture Minister Lung Ying-tai praised them for "devoting all their life to preserving the precious national memories with the most modest affection that is closest to our roots.”

This year's award winners range from preservers of both tangible and intangible cultural assets, many of which are well-known "living materials for cultural heritage education.” One of them is Liao Wu-chih, chairman of the Dalongdong Baoan Temple in Taipei, who has restored the historic temple carefully and conscientiously. He also received the Asia-Pacific Award for Cultural Heritage Conservation from UNESCOfor his work on the temple in 2003.

Another recipient is Cheng-hwa Tsang, anthropology researcher at Taiwan's leading research institute, Academia Sinica. He has committed himself to studying the history of underwater excavation in Taiwan.

The National Taiwan Museum was also recognized for its efforts in restoring and revitalizing the Taipei Camphor Factory, a national historic asset.

Lung noted that Taiwan has promoted cultural heritage preservation for three decades, from each single monument to their neighborhoods and surrounding communities. The work of revitalization also includes intangible assets and underwater excavation, including indigenous Atayal ancient ballads, and a historic sunken vessel in the waters near Penghu Island. "These are all done step by step, in face ofbig challenges that race against time,” said Lung.

The Ministry of Culture has also been working to improve the systems for cultural heritage preservation, such as completing the revision draft of the Cultural Heritage Preservation Act, proposing the Underwater Cultural Heritage Act, and designating major national folk heritage.

The other awardees are the Luzhou Lee Family Mansion, the Chen Dexing Ancestral Temple, and Ho Ta-huang, chairman of the Xingang Fong Tian Temple in Chiayi County.