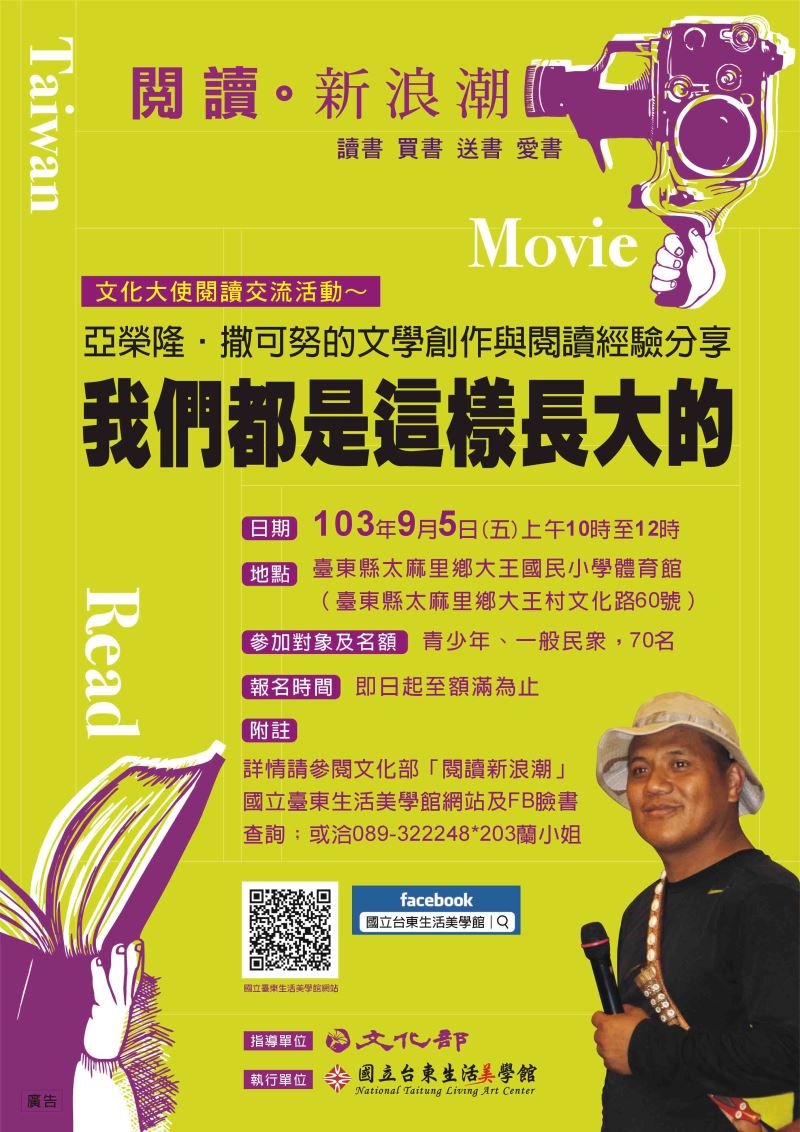 Known as "A New Wave of Reading,” the program was established in 2013 to promote the habit of reading by evoking the public sway of celebrities and famous figures. Previous spokespeople for the program include veteran actress Brigitte Lin (林青霞), comic artist Cory (顆粒), novelist and blogger Giddens Ko (九把刀), and actor-singer Wilson Chen (陳柏霖).

Each appointed ambassador holds several intimate sessions to read aloud literary passages, share his or her favorite reads, and explain how reading can has inspire change in one's professional and personal lives. Last year, over 2,700 individuals attended the 9 sessions that were held across the nation.

Apart from Tsai, who has participated in the program for two consecutive years, the other new ambassadors will be onboard from this August to November. The hefty lineup includes TV director Jyu, who adapted the widely successful Taiwanese drama series "It Started With A Kiss” from Japanese manga, and the multi-talented Sakinu, who has enjoyed thorough success in his capacity as a writer, artist, forest guard, and television show host.

The other new appointment was selected for his achievements in the 2014 Bologna International Children's Book Fair during March. Hao founded the Grimm Press, which was named Asia's best children's publisher this year. It was the first publishing house from the Chinese-speaking sphereto ever receive the honor.

To broaden the scope and impact of the "A New Wave of Reading” program, the Ministry of Culture has also recruited its four subordinate agencies — the National Living Arts Centers in Hsinchu, Changhua, Tainan, and Taitung — to organize the sessions across the nation's 18 special municipalities and counties.

Sakinu will hold his first reading session on Sept. 5 at the National Living Arts Center in Taitung. Find out more at readingwave.moc.gov.tw.