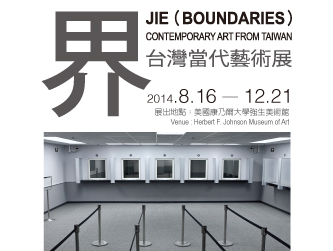 A contemporary art exhibition exploring the ever-shifting socioeconomic boundaries and cultural identity of Taiwan will be shown at Cornell University in New York from Aug. 16 to Dec. 21.

Co-organized by the Taichung-based National Taiwan Museum of Fine Arts (NTMOFA) and Cornell's Herbert F. Johnson Museum of Art, the four-month event is curated by Cornell art professor Pan An-yi (潘安儀) to present the ways that globalization has altered Taiwan.

The exhibition is named "Jie,” after the Chinese word for scope or boundary, and showcases artwork loaned from the NTMOFA's collection to demonstrate the different viewpoints of artists from different generations.

There are those who were born under martial law, which remained in place from 1949 to 1987; those who sought to reject globalization for its irreversible impact on local culture and economy; and those who seek to rectify present-day social and environmental concerns in a race against time.

A total of fifty-some digital media artworks by 33 artists, including Chen Chieh-jen (陳界仁), Yao Jui-chung (姚瑞中), and Tu Pei-shih (杜珮詩), have been transported to Ithaca for the "Jie” exhibition.