Taiwanese and Okinawan musicians will team up this June to perform in the first-ever HOT Islands Music Festival in Taiwan, in which HOT is stylized with capital letters because it also stands for Hualien, Okinawa, and Taitung.

The three regions were picked for their distinct coastal flavors. While Hualien and Taitung will promote their aboriginal tunes, Okinawa will showcase its own vein of music, which was particularly influenced by American popular and rock music because of the proliferation of American military bases on Okinawa.

On June 14 and 15, two indigenous singers, Miru Roking of the Taroko tribe and Tenmoy Cinaw of the Amis tribe, will hold a mini concert on the beautiful coastline of eastern Taiwan's Hualien County.

On June 14 and 15, Japanese bands Jujumo and Harukaze will serenade Hualien concertgoers with authentic Okinawan instruments such as the taiko drums and the sanshin, a three-stringed lute that is covered in snake skin. They will repeat their performances again in Taitung.

The 1st HOT Island Music Festival is organized by the National Living Arts Center of Taitung, a subordinate organization of the Ministry of Culture that has extensive experience in working with Okinawan artists. It held an art exhibition earlier this February that featured Ryukyu-based painters and photographers Yasuo Arakaki (新垣安雄), Souten Okuhara (奥原崇典), Yasunosuke Arakaki (新垣安之輔), and Toyomitsu Higa (比嘉豊光). 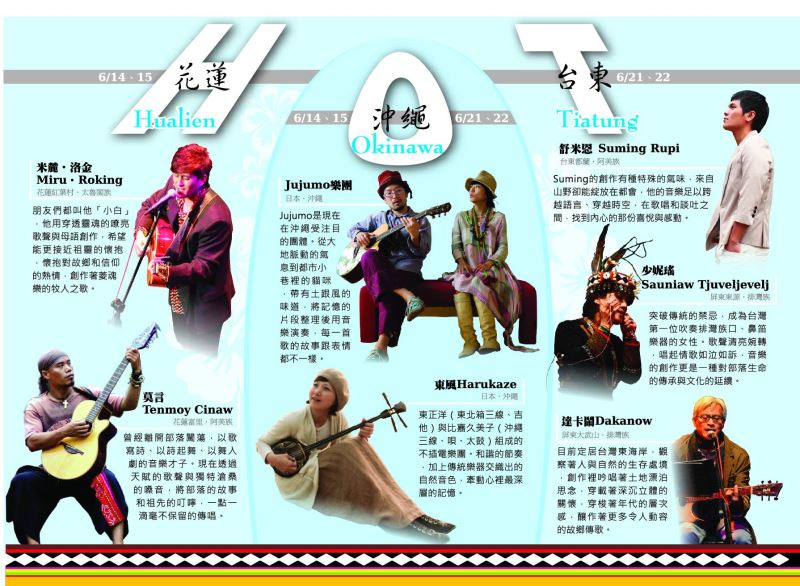