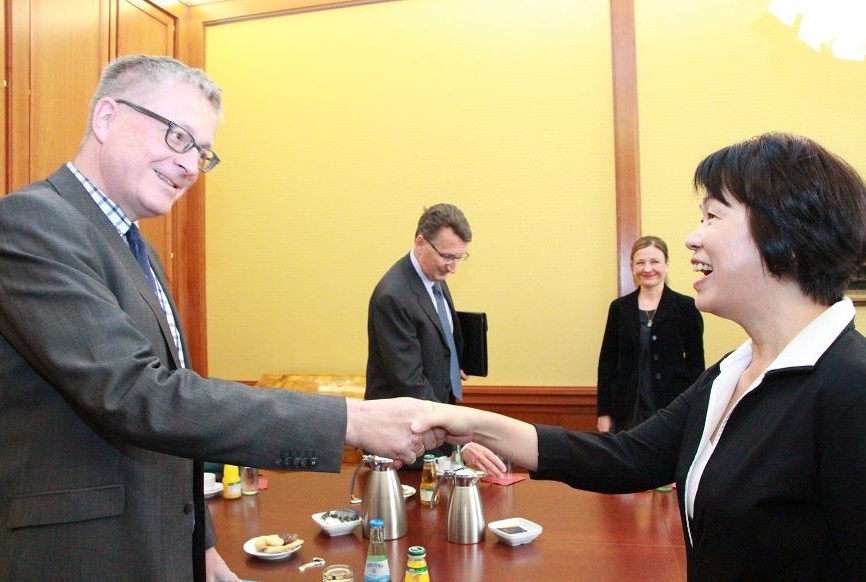 Culture Minister Lung Ying-tai met with Stephen Steinlein, state secretary of Germany's Federal Foreign Office, on June 10. It was the highest-level meeting between Taiwanese and German officials in recent years.

Minister Lung was received with high honors by the German State Secretary, and the formal meeting took place at the Berlin headquarters of the Federal Foreign Office. Taiwan and Germany do not have formal diplomatic ties, making such meetings between high-level government officials rare.

In the milestone meeting, Minister Lung pointed out how Taiwan has established close cultural arrangements with European nations such as France and the United Kingdom. She said that she hopes Taiwan and Germany, too, can strengthen ties through the arts, heritage preservation, and literature.

The two officials discussed a wide range of topics, from potential Taiwan-Germany cultural collaborations to the global cultural scene, the Taiwan Strait situation, the defense of human rights, and the importance of transitional justice.

Having done some research on Lung's literary works, Steinlein asked many questions on her writings on the Chinese Civil War and her viewpoint on history. Steinlein also asked in detail how Taiwan's citizens identify themselves, and whether such identity issues affected a student-led social movement in Taiwan in March.

Describing Taiwan as a "laboratory of democracy” in the Chinese-speaking world, Lung said the island is more of an indicator of democratic implementation for mainland China. In recent years, Taiwan has also been closely watched by people in Hong Kong, she added.

"For the West to understand China,” she said, Taiwan is a major key, and "to understand Taiwan, one has to start with its culture.”

As for understandings between Taiwan and Germany, the Minister said Taiwan has a faint knowledge of Continental Europe, transitional justice, and highly-experimental art, due to more contact with American perspectives. Germany, in turn, can surely develop unique views on Asia by engaging with Taiwan, she noted. "Taiwan and Germany can establish a standard mechanism for extensive cultural exchanges,” added Lung.

Lung left Taiwan on June 5 on a 10-day trip to Switzerland and Germany, with the aim of deepening the cultural ties between Taiwan and the two European countries.

She arrived in Berlin on June 8 and is scheduled to stay in Germany until June 14.