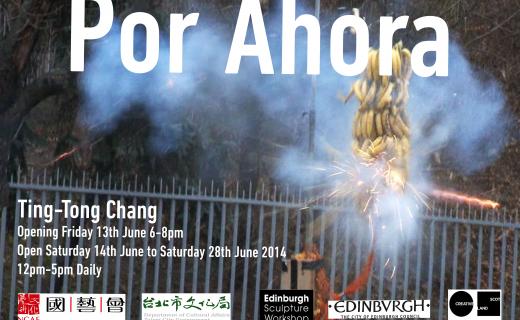 Taiwanese artist Chang Ting-tong, the recipient of the 2014 Edinburgh Creative Initiative Award, will hold a solo exhibition at the Edinburgh Sculpture Workshop from June 14 through June 28.

Born in 1982, Chang (張碩尹) is an installation artist who transforms the byproducts of an industrial society into art with a social stance. Referring to cities as "machines,” the 32-year-old examines how an object progresses from being productive to counter-productive. He holds a master's in fine arts from the University of London's Goldsmiths College, and has been featured in joint exhibitions at Taichung, Shanghai, Beijing, Warsaw, Berlin, and Moscow.

He was selected by the Edinburgh Sculpture Workshop to receive the Edinburgh Creative Initiative Award, and his three-month residency wassubsidized by the Taipei-based National Culture and Arts Foundation.

Titled "Por Ahora,” meaning "For Now,” Chang's latest installation series draw inspiration from a speech given by the late Venezuelan politician Hugo Chavez in February 1992. The infamous comment was made after Chavez spearheaded a failed coup d'etat codenamed Operation Zamora.

"Por ahora” became synonymous with the incorrigible spirit of grassroots rebellion, and Chang has reinterpreted the phrase using modern technology such as Japanese Makita power tools and ageless symbolism such as the figure of Christ nailed to the cross.