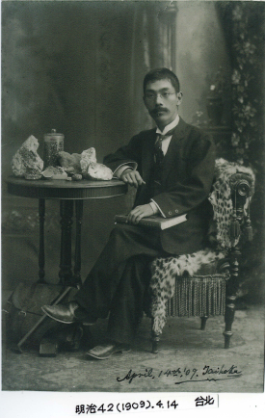 At the start of the 20th century, many countries around the globe became more proactive towards protecting their historic and natural resources. Whilst Taiwan was under Japanese colonial rule, many Japanese scholars such as Okamoto Yohachiro (岡本要八郎) helped to raise greater awareness of the importance of establishing a legal framework for heritage preservation.

To commemorate the late Yohachiro (1876 - 1960) and his lifelong studies on Taiwanese geology, the National Taiwan Museum will hold a four-month exhibition to showcase 20 unique geological specimens unearthed by the Japanese scholar.

Yohachiro is particularly noted for his 1905 discovery of an indigenous specimen now known as Hokutolite (北投石), which literally means "stone of Beitou.” As its name suggests, this unique mineral hails from Taipei's Beitou District, a region renowned for its hot springs and volcanic activity.

Ranging from milky white to yellowish ochre in color, Hokutolite is a lead variant of Baryte that is only produced by very acidic hot springs. Mildly radioactive due to traces of radium (RA), Hokutolite is extremely rare and has received official designation as a national asset in Taiwan. It is also the first mineral to have its own natural reserve.

Now only found in the Beitou River (Hokutolite) Natural Reserve, the specimen will be made accessible to the general public through the "Selected Mineral and Rock Collections” exhibition at the Taipei-based National Taiwan Museum.

The exhibition, which will run through Sept. 21, will also feature protected specimens such as the Veined Stone of Penghu (澎湖文石), a type of agate that features rounded "eye” patterns, giving rise to its nickname "Angel Eyes.”

‘Selected Mineral and Rock Collections of the NTM'