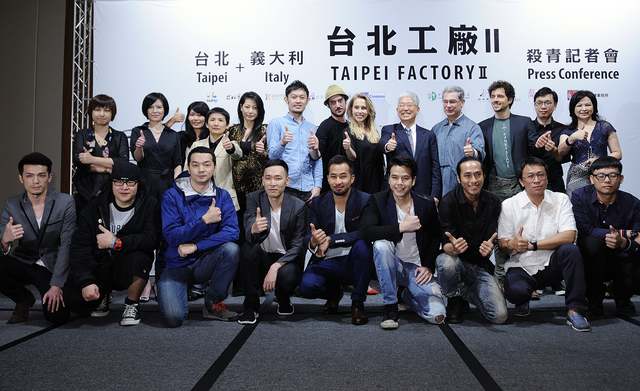 Three films co-produced by Taiwan and Italy aim to hold their international premieres during the upcoming Venice International Film Festival, which is slated for Aug. 27 through Sept. 6.

According to the Taipei Film Commission, it is the first time Taiwanese and Italian film companies have worked together. Such co-production is part of the 'Taipei Factory' project, which helps match the local film sector with foreign counterparts to diversify Taiwan's film industry.

In collaboration with Rai Cinema, the production and distribution arm of Italy's national public broadcasting company Rai, the Taipei commission has finished shooting the three films on May 21, starring both Taiwanese and Italian cast and directed by Taiwanese directors.

The three 30-minute films consist of 'Luca,' directed by Hsieh Chun-yi, 'Soap Opera,' by Cho Li, and 'The Thrill is Gone,' by Hou Chi-jan. They will be jointly promoted as 'Taipei Factory II,' covering the genres of drama, thriller, and romantic comedy.

Both the Italian and Taiwanese casts praised the opportunity to work together, commending each other on their dedication and hard work, while the directors also acknowledged that shooting the films was a challenging yet rewarding experience.

After the 12-day shooting in Taipei, the Italian cast said they have gained a very good impression of the city, despite the heavy rain and bouts of earthquakes.

The May 21 press conference was attended by Taipei Deputy Mayor Chang Chin-oh and Mario Palma, representative of the Italian Economic, Trade and Cultural Promotion Office in Taipei.