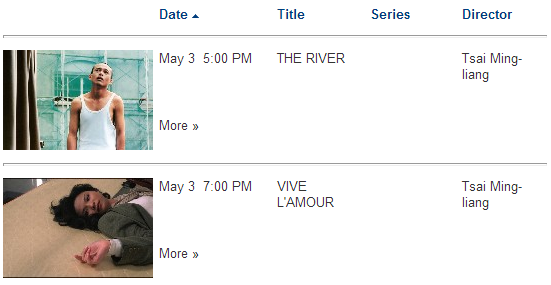 The Ministry of Culture's Houston branch is co-organizing the "Taiwan Film Festival — Tsai Ming-liang Series” with Houston-based Rice University. Two films by the Taiwan-based Malaysian director — "The River” and "Vivel'Amour” — will be screened on the university's campus on May 3.

"Vivel'Amour,” one of Tsai's best-known films, won several awards in 1994, including the Golden Lion Award at the Venice International Film Festival. With very simple soundtrack and lines, the movie opened up a new era for Taiwan films in 1990s.

"The River” garnered many major awards, including the Silver Bear for Special Jury Prize at the Berlin International Film Festival in 1997.

The film festival will be accompanied by pre- and post-screening seminars, in which Professor Michael Sicinski from the University of Houston, and Dr. Karen Fang and Dr. Aynne Kokas from Rice University will lead discussions on the meaning behind Tsai's movies.