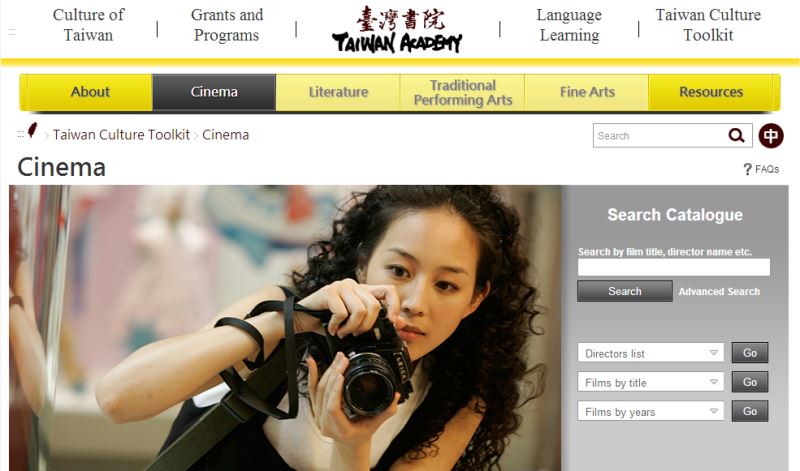 Tapping into the power of cloud technology, the Ministry of Culture is now offering an extensive digital database that is aimed at making Taiwan's cultural wealth more available overseas through the internet.

It is part an upcoming series of 'cultural toolkits' that will help overseas groups, communities, and schools organize events that feature Taiwanese literature, film, performing arts, and fine arts.

The Cinema Toolkit is the first of the series to be launched.

Groups or schools interested in screening Taiwanese films can rent the 70 films in DVD formats for free at Taiwan's overseas embassies and representative offices, as well as from the Taiwan Academy branches in New York, Los Angeles, and Houston.

Culture Minister Lung Ying-tai explained that the 'toolkit' idea was inspired by France, which provides online information on thousands of its films to promote French culture overseas.

Shesaid an important goal of the toolkit series is to allow a foreign teacher or curator who might not be familiar with Taiwan to easily organize events featuring Taiwan's films, culture or art.

Among the 70 films are several by prominent Taiwanese directors, such as Ang Lee, Hou Hsiao-hsien, Edward Yang, and Tsai Ming-liang. There are also award-winning features and documentaries, Taiwanese-language films, and classic films dating back to the 1950s and ‘60s.

All of the films have been subtitled in English.

The toolkits will first be available in English and Chinese, and then in other languages such as French, German, and Spanish. More films will also be added to the list in the future.

The Taiwan Cinema Toolkit is available at www.taiwanacademy.tw/toolkit/.