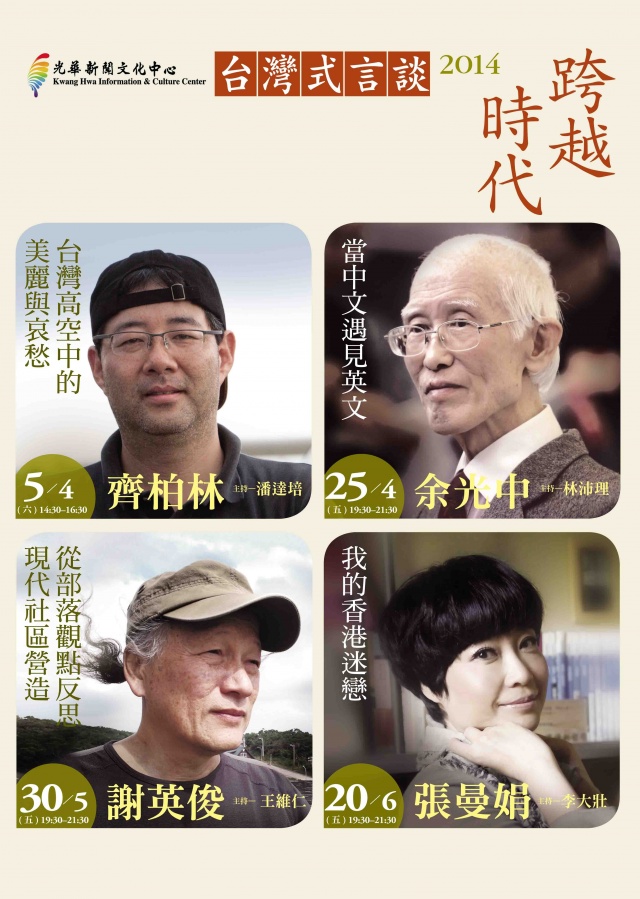 The Taiwan Dialogue Series is an annual event organized by the Kwang Hwa Information and Culture Centre, the Ministry of Culture's Hong Kong branch. The popular forums feature Taiwanese icons from creative fields, with each discussing a different topic of interest with Hong Kong audiences.

Chi, whose debut production "Beyond Beauty:Taiwan from Above” won the Golden Horse Award for Best Documentary in 2013, will lead a debate on economic development and environmental protection on April 5. Chi will also share his observations on Taiwan from an aerial photographer's point of view.

Yu, a renowned poet and translator, will discuss his experiences in Chinese-English translations at the Kwang Hwa Centreon April 25. Taking the topic of translation and language studies even further, Yu will also share how his career with words has inspired him in life.

Hsieh, a Taichung-based architect who has worked to spread the idea of "building for people,” is a pioneer of the sustainable architecture and collaborative construction movement. On May 30, he will elaborate on his architectural projects that incorporate greener elements and foster community ties.

The final forum of the series will highlight Chang, a former director at the Kwang Hwa Centretwo years ago. She will return to Hong Kong and talk about her infatuation for the Pearl of the Orient on June 20.

Organized by the Kwang Hwa Information and Culture Centre