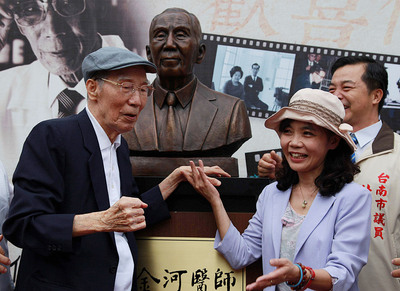 The Executive Yuan has approved an application for a presidential citation applied by the Ministry of Culture in recognition of the contributions made by the late doctor Wang King-ho (王金河), the selfless "Healer of Blackfoot Disease.”

Born on April 23, 1916 in the Beimen Township of Tainan County, Wang entered Beimen Public School (formerly the Beimen Elementary School) at the age of 7, and continued his studies at Tainan's Chang Jung High School, where he studied under the Christian faith.

In 1941, he graduated from the Medical School of Tokyo (東京醫科大學) and began to practice medicine in Japan. After working as a surgeon for two years at the Ohkubo Hospital (太久保病院) in Tokyo, he decided to return to Taiwan in the midst of World War II to care for his grievously-ill mother. He settled down in Tainan ever since.

During his medical career, Wang dedicated most of his time to combating Blackfoot disease, a gangrene condition triggered by drinking arsenic-contaminated water. Apart from offering free treatment to those afflicted with Blackfoot disease for over 25 years, the doctor also paid for funeral services for those who passed away in destitute.

In recognition of his lifelong devotion, the public nicknamed Wang the "Healer of Blackfoot Disease.”

Blackfoot disease was first seen around 1920 during the period of Japanese rule on Taiwan, yet it was not widespread until after 1956 along the southwestern coast where the wells became contaminated with high levels of arsenic. The disease, which was unique to Taiwan and has not yet been documented elsewhere, often led to amputation.

Wang died at the age of 98 in mid-March. The presidential citation will be presented to Wang's family at his farewell service on March 29.