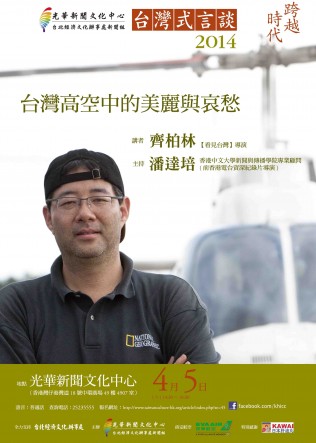 Taiwanese documentary director Chi Po-lin (齊柏林) has been invited by the Kwang Hwa Information and Culture Centre, Taiwan's cultural office in Hong Kong, to lead a discussion on his debut film "Beyond Beauty,” which not only grossed a record NT$200 million (US$6.57 million), but also won the Golden Horse Award for Best Documentary in 2013.

"Beyond Beauty — Taiwan From Above,” a documentary produced with aerial shots of Taiwan's landscapes, also had the highest production cost for a Taiwan-made documentary at approximately NT$90 million. The visual impact of the film, which contains both the beautiful images of Taiwan's natural landscapes and the extensive pollution caused by human activities, helped to raise wider awareness of the need for stronger environmental protection.

Chi, a former public servant, will share with Hong Kong audiences why he abandoned his comfortable life of working for the government, and how he sought the funds to make the film. The senior aerial photographer will also elaborate on why he believes documentaries can help a society change for the better.

The event is scheduled for April 5 at the Kwang Hwa Information and Culture Centre as part of its 2014 Taiwanese Dialogue Series. Documentary producer Eric Poon (潘達培), a professional consultant at the Chinese University of Hong Kong, will host the event.