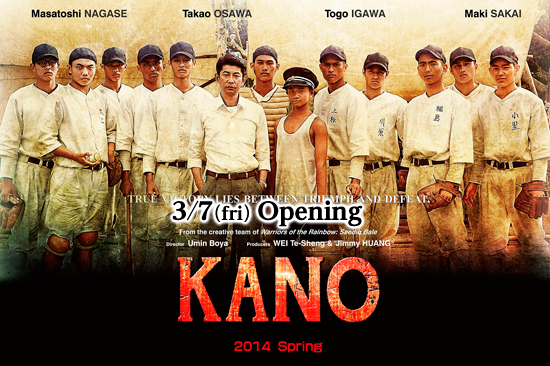 To help introduce Taiwanese cinema to Japanese audiences, the international premiere of several new Taiwan-produced movies will be held in Osaka this March. Many prominent movie stars, actresses, and directors from both nations will also join the star-studded events.

The first Taiwanese movie to premiere in Japan will be the heartwarming baseball story "Kano” on March 7. It will be the opening film of the 2014 Osaka Asian Film Festival.

On March 13, the Taipei Cultural Center in Tokyo will hold a Taiwan culture fair at Bogart's Café in Osaka. The fair, which will run from 4:30 PM through 7:00 PM, will be followed by the movie premiere of "A Minute More” (只要一分鐘).

Chen Wei-ling (陳慧翎), who directed the remake of the heart-touching tale of a dog's long wait for its master's return, and cast members such as Taiwanese actor Peter Ho (何潤東) and Japanese actress Reina Ikehata will attend the event at Asahi Shimbun's Osaka headquarters.

The 2013 Taiwanese thriller "Soul” (失魂) will also debut in the Kansai segment of the film festival, while four other joint productions between Taiwan and Japan will air in another special program in Osaka.

'Beyond Beauty: Taiwan from Above' (看見台灣), an environmental-themed documentary filmed from an aerial view by director Chi Po-lin (齊柏林), will also make its international debut at the Osaka film festival.

* Editor's Note: Asahi Shimbun, one of the five national newspapers in Japan, is a formal partner under the Ministry's Spotlight Taiwan global initiative.