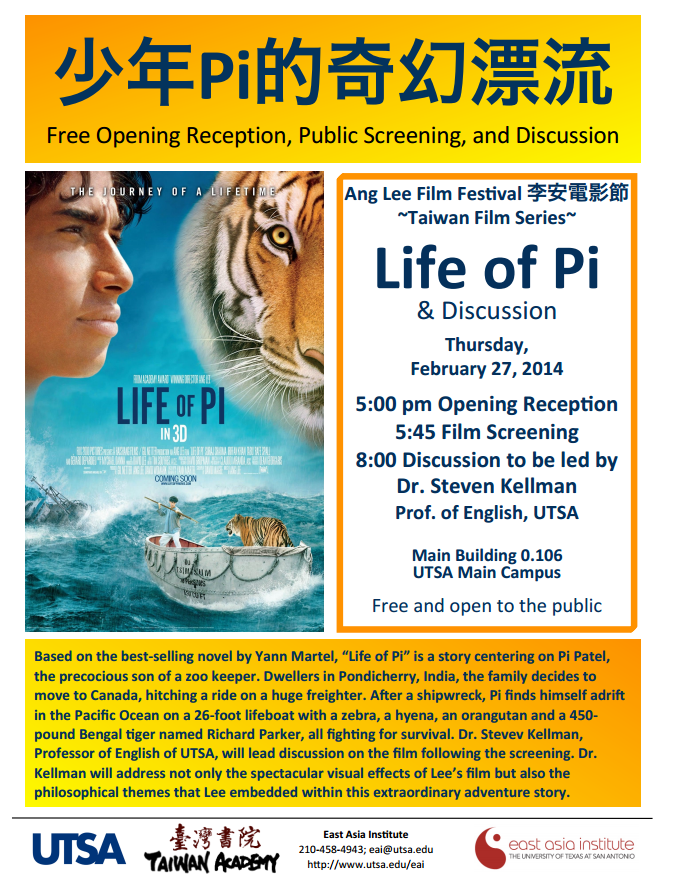 The Taiwan Academy in Houston, in conjunction with the East Asia Institute of the University of Texas at San Antonio, will co-host the screening of three award-winning films from Taiwanese director Ang Lee - "Life of Pi,” "The Wedding Banquet,” and "Eat Drink Man Woman.”

The screenings are scheduled for Feb. 27, March 17, and April 10 at the University, followed by lectures and discussions chaired by Dr. Steve Kellman, comparative literature professor at UTSA, and two other scholars - Mimi Yu, associate director of UTSA's East Asia Institute, and Dr. Jie Zhang, associate professor of Chinese at Trinity University.

Ang Lee excels at fusing Western and Eastern cultures, which he fully demonstrated in his latest work "Life of Pi.” The adaptation from Yann Martel's bestseller of the same title expresses Eastern spirit in a 3D film produced with cutting-edge technology. The surreal scenes in the adventure fantasy, such as a huge whale soaring above the ocean and countless luminescent jellyfish floating in the water, are metaphors of the Eastern philosophy and spirit.

The director used spectacular 3D visual effects to illustrate such profound concepts such as how mankind faces and deals with its predicaments.

The other two films Lee made earlier in his career also depict the conflicts and balance between individuals and family, traditions, and modernity, as well as those between the East and West. The audience can see the weakening of traditional paternal authority in Taiwan and the compromise and difficulty in the face of social changes.

In "The Wedding Banquet,” Lee reveals a gay Chinese American's challenge to traditional Chinese family concepts; the conflict between the individual and his family is eventually resolved by the birth of a child.

Set in Taipei, "Eat Drink Man Woman” skillfully connects traditions and modernity through men's and women's daily dining, as portrayed in the relationships of an old chef's three daughters.

After each screening, one of the scholars will discuss the meaning and cultural values inherent in the film. More details on the screenings are available atwww.utsa.com/eai.