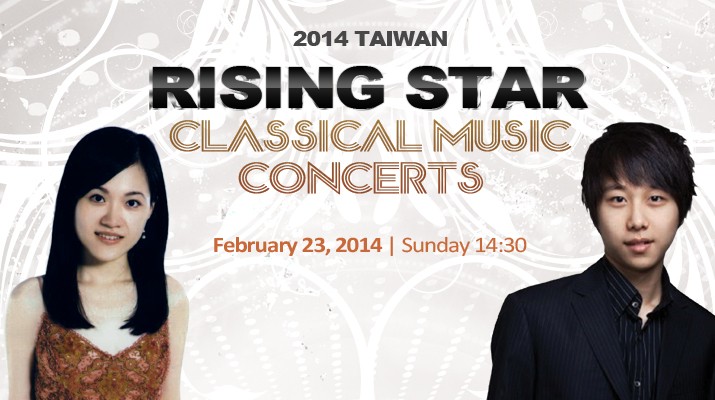 Lu will play "Memories of Home” by Taiwanese composer Hsiao Ty-zen (蕭泰然), who was the sole recipient of the 2009 National Cultural Award, the top cultural honor in Taiwan. She and Lin will also play works by Chopin, Mozart, and Debussy.

Lu's recent debut recital at the New York Carnegie Hall was described by the New York Concert Reviews as "a joyful caprice … [that] offered the promise of further depth and subtlety.” She came in third and won the Isabel Scionti Award for Outstanding Piano Solo Performance at the 48th Kingsville Young Performers Competition. Alice Lu earned her bachelor's degree from the Manhattan School of Music, where she was a scholarship student and studied with Professor Solomon Mikowsky. Now she teaches in the Piano School of NYC.

Lin, also a rising star, entered the Juilliard Pre-College Division on a full scholarship at the age of 10. He then made his international debut by playing piano with the New York Philharmonic at Avery Fisher Hall when he was 13.

He has performed at renowned venues around the world such as the Louvre and Salle Cortot in France, the National Dublin Hall in Ireland, the Seoul Arts Center in South Korea, and the Sendai Cultural Center in Japan. Because of his extensive interest in musical performances, Lin has also played concertos, solos, and chamber music with various orchestras, including New Jersey Symphony Orchestra, Orlando Philharmonic, Hilton Head Symphony and Japan's Sendai Symphony Orchestra. He is now on a Performance Diploma course at the Curtis Institute of Music.

The free concert is fully booked, but people who are interested may remain at the lobby of the Taiwan Academy in New York and wait for spare seats on Feb. 23. More information can be found here.