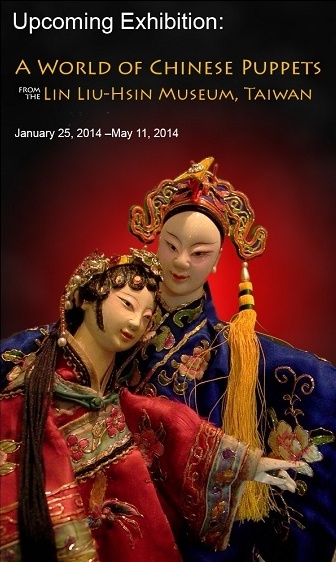 The Taiwan Academy in Los Angeles under the Ministry of Culture has partnered up with the Honolulu-based East-West Center to organize a series of events featuring Taiwanese hand puppetry. The exhibition and workshop series, entitled "A World of Chinese Puppetry from the Lin Liu-hsin Puppet Theatre Museum,” will debut at the East-West Center on Jan. 25 and run through May 11.

Taiwanese hand puppetry is a rich and diverse traditional art form that combines music with carved artworks, embroidery, and graceful performances. The items that have been transported to Hawaii include shadow, rod, glove, and string (marionette) puppets from the Lin Liu-hsin Museum's collection. Other artifacts that will be displayed in Honolulu include stage settings, scripts, musical instruments, and historic photos.

The exhibition will remain open until May 11; the museum's Taiyuan Puppet Theatre Company, which is best known for exploring the fusion of experimental music and puppet performances, will also travel to the Hawaiian capital to stage a total of three performances on Jan. 25 and 26. The programs will include traditional plays and more interactive modern plays.

The plot of the comedy to be staged is a love story set in ancient times, between a Chinese intellectual and a beautiful woman. In this interesting, easy-to-understand story, all of the characters' bodily characteristics will be fully communicated through the skilled artistry of the puppeteers. It is also a wonderful window into the world of traditional hand puppet plays, encompassing a design of various subtle elements. In addition to live music accompanying the shows, the glittering golden stage is also part of a comprehensive presentation of Taiwanese puppetry.

Since its establishment in 2000, the Taiyuan Puppet Theatre Company has performed at various venues in over 30 countries, including the tropical forests of Central and South America, the Royal AlbertHalland the Victoria and Albert Museum in London, the countryside of Cambodia, a 17th-century church in the Netherlands, and Taipei's Dadaocheng Plaza.