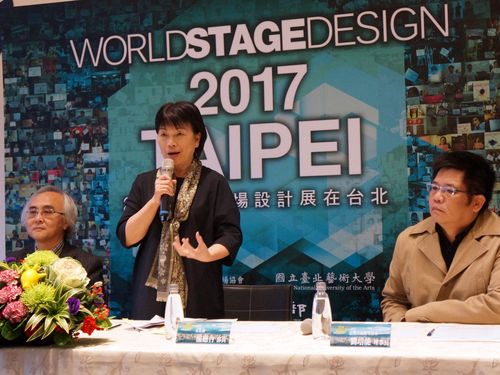 Taiwan will host the 2017 World Stage Design, an international theater design exhibition and competition, beating out China and the Philippines in a competitivethree-phase screening process.

Held every four years, the event includes the world congress for the International Organization of Scenographers, Theatre Architects and Technicians (OISTAT), which has members in 50 countries and its headquarters in Taipei.

'That is where Taiwan's vitality lies,' the Minister stated.

She said she hopes that hosting the event will help boost Taiwan's visibility in the international community.

The theme for the 2017 event will be 'Transformation,' which is intended to show the creative power of theater art, said Wang Shih-hsin, an associate professor of theatrical design and technology who gave a presentation during Taiwan's bid to host at the OISTAT congress last year.

The first World Stage Design took place in Toronto in 2005. It was held in Seoul in 2009 and hosted by Welsh capital of Cardiff in 2013.

The 2017 event, to be held from July 1 to 9 at the Taipei National University of the Arts, is expected to attract theater experts and representatives from more than 50 countries.

The theater exhibition is at the heart of the festival and will feature a selection of the most innovative and ground-breaking designs for performance from around the world. This unique collection of international works will include original costumes, puppetry, drawings, paintings, photographs and props alongside interactive exhibits from lighting, video, and sound designers.