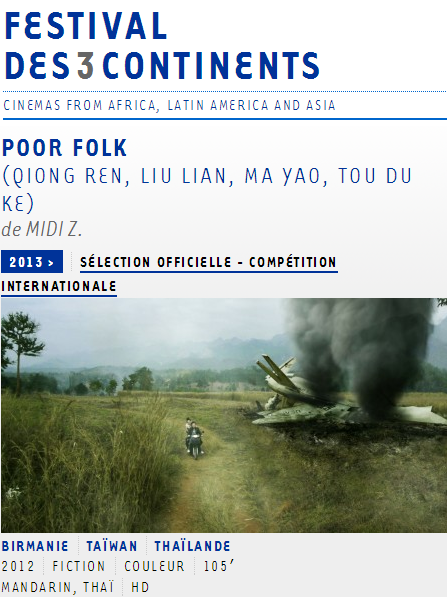 "Poor Folk,” directed by Myanmar-born Taiwanese director Midi Zhao, has been nominated for the Golden Montgolfiere award at the Festival of the Three Continents (Festival des 3 Continents, F3C) in France this year.

The 35th F3C, scheduled for Nov. 19 through 26 in the French city of Nantes, will evaluate nine entries for its international competition this year. The other nominated films are from Thailand, South Korea, Japan, mainland China, Turkey, Iran and Brazil.

"Poor Folk” portrays the poor living environment of ethnic Chinese villagers on the Myanmar-Thailand border, where Zhao was born. The plight of Indochina refugees is told through the story of a young woman, who tries to immigrate to Taiwan illegally, and her treatment under a human trafficking gang.

Zhao will walk the red carpet with the film's leading actress Patty Wu when they attend the festival later this week.

In other related news, "Stray Dogs” from renowned Taiwanese director Tsai Ming-liang, who is well-known among French moviegoers, will also be shown in the festival's "Official Selection - Out of International Competition” program.

The festival, which was started by Alain Jalladeau and his brother Philippe in 1979, introduces Asian, African and Latin American films and documentaries to Europe to promote intercontinental cultural exchanges through motion pictures.

Taking place in late November or early December every year, the prestigious F3C screens 80 to 100 films during a one-week period. Several Taiwanese directors, including Hou Hsiao-hsien, Edward Yang, Tsai Ming-liang and Hung Hung (Yen Hung-ya), were showcased by the festival in the early years of their careers.

It has helped to introduce Taiwan's New Wave Cinema in a special program since 1993. The festival was also the first to organize a memorial exhibition for Edward Yang in 2008 after he died the previous year.