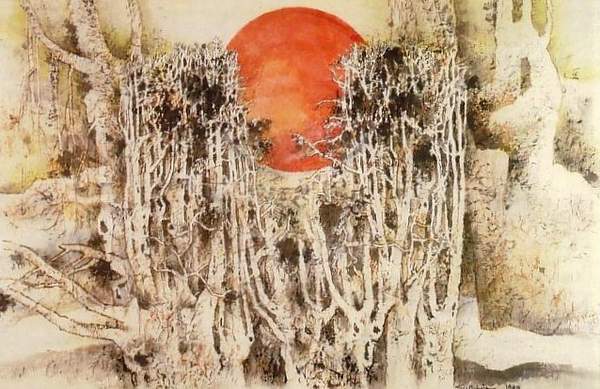 The Taiwan Academy in Houston will showcase 20 works by renowned Taiwanese ink painter Charles Liu in an exhibition titled "Shan Shui: The Beckoning of Nature” at the Three Allen Center Art Galley from Nov. 14 through Dec. 19.

The main difference between Eastern and Western arts is their emphasis, with the former relating to nature and the latter focusing on humans, according to Liu. The "human-centered” philosophy has led to an overly ambitious attitude while the "harmony among men and nature” philosophy has brought composure and inner peace.

"Shan Shui,” funded by the Academy and supported by CenterPointEnergy and Allen Center, will display Liu's ink-brush paintings and installations. The displayed items range from large-size ink-brush paintings to smaller ones that a hand can cover, all portraying the philosophy of Eastern aesthetics.

Liu explained that he captures the poised harmony and co-existence in nature by using traditional Eastern media such as ink. Both the lofty Mount Everest and the natural landscape of Taiwan in his works are a reflection of his inner world.

As a prominent contemporary ink painter and an independent curator and critic, Liu has devoted himself to a more modern interpretation of the arts.Pr

His past experiences include teaching at the Illinois-based North Central College of Naperville, co-organizing an exhibition with Chinese artist Cai Guo-qiang at the Vancouver Contemporary Art Gallery in 2001, and receiving a grant from the U.S. National Endowment Foundation in 2011. He has also been invited by the Sumi-e Society of America to be the sole judge for its 2014 Annual Juried Exhibition.