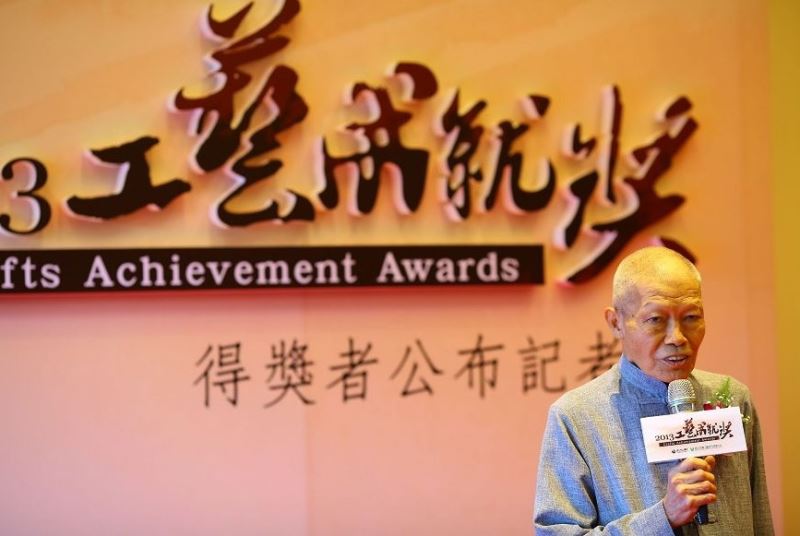 In recognition of his remarkable achievements in producing lacquered bamboo baskets, the 2013 Crafts Achievement Awardwill be given to bamboo-weaving artist Li Jung-lieh (李榮烈).

Li, a Nantou County native, enrolled in 1954 in a workshop founded by the highly acclaimed artisan Dr. Yen Shuei-lung, and was mentored by senior bamboo-weaving instructor Huang Tu-shan, who later became the winner of the 2008 National Crafts Achievement Award. Li later left the studio to work in fields other than bamboo weaving between 1964 and 1978, during which he learned about carpentry and was dispatched by the Ministry of Foreign Affairs to theMalagasy Republic, today's Madagascar, to serve as a technician for bamboo-based crafts.

In 1978, the 42-year-old Li received a job offer to work at the Nantou County Craft Institute, the craft workshop he once attended. He then learned the skills and knowledge of lacquerware when artist Chen Huo-ching taught at the institute in 1984. Li began mixing different materials and finally mastered the art of lacquered bamboo baskets, which refers to bamboo work painted with lacquer.

At the age of 53, Li's career reached its pinnacle, receiving awards one after another, including the top award of the National Art Exhibition's crafts category in 1989 and the 10th Annual Cultural Heritage Award in 1994. He has continued to teach around Taiwan and overseas since he retired from the institute 12 years ago.

In addition to mentoring younger generations of practitioners, Li has also contributed to the publication of two books on crafts, one of which describes his experiences in sharing his knowledge and personal joy in crafts.

As one of the few Taiwanese artisans who excel at bamboo weaving, carpentry and lacquer arts, Li has been selected to be the recipient of the top craft honor in Taiwan for the year 2013. The award ceremony will take place at the National Taiwan Craft Research and Development Institute (NTCRI) in Nantou County on Dec. 1.