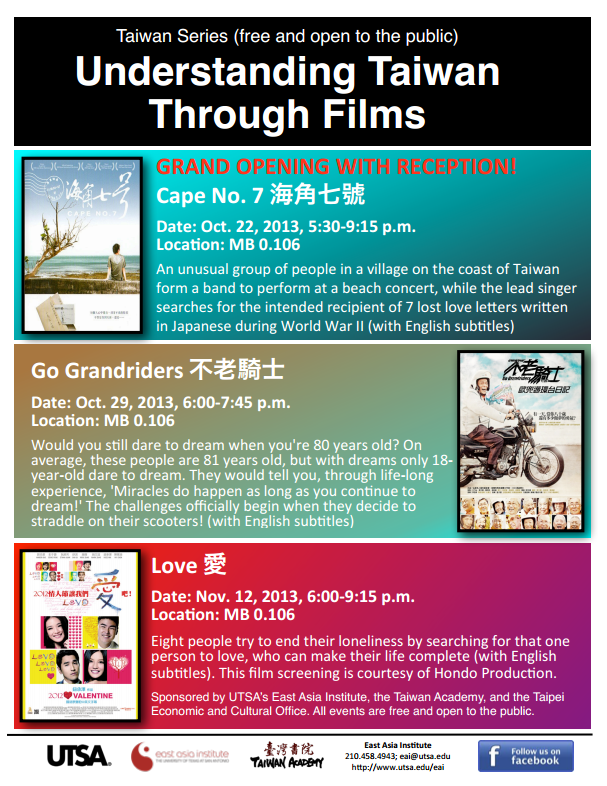 The Ministry of Culture's Taiwan Academy in Houston is co-organizing the "Understanding Taiwan Through Films”festival with the University of Texas at San Antonio to screen three films that will be accompanied by Q&A sessions. The three films - "Cape No. 7,” "GoGrandriders” and "Love” - were chosen to show Taiwanese people's positive energy and the Taiwanese spirit of being undeterred by life's challenges.

Starting with Oct. 22, the opening film "Cape No. 7” will help convey Taiwan's "New Taike” spirit, which refers to the determination to move forward despite hardships. The rainbow that constantly appears in the movie symbolizes the strength of mind that guides the characters through difficulties.

The "New Taike” culture described in the film has three elements - affirmative radicalism, harmless ostentation and the Taiwanese dream of success. Portraying a new Taiwan identity, the romance comedy captures traditional folk entertainment and grass-root culture with a band formed by an old man, a little girl, a policeman and a salesperson - i.e. people at the bottom of the social pyramid.

"Go, Grandriders,” the best-selling Taiwan documentary in history that will be screened at the university on Oct. 29, depicts a similar spirit of pursuing one's dreams and not compromising on one's ideals.

Scheduled to be shown on Nov. 12 is "Love,” a romance drama that discusses young people's complicated relationships. It also looks at friendship and familial love through eight main characters in four relationships, revealing their individual reactions to the face of love.

The University of Texas in San Antonio is the latest American educational institute to partner with the Ministry's Taiwan Academy program, following in the footsteps of fellow Texan Trinity College, New York's Columbia University and the University of Hawaii.